The shortage of fish caught in the state due to trawling ban has resulted in vast quantities of it being brought from across the borders.

KOCHI: The CIFTest — developed by Indian Council for Agriculture & Research-Centre Institute of Fisheries Technology (ICAR-CIFT) — is hogging the limelight as the food safety officers seize more and more chemical-contaminated fish coming into the state. 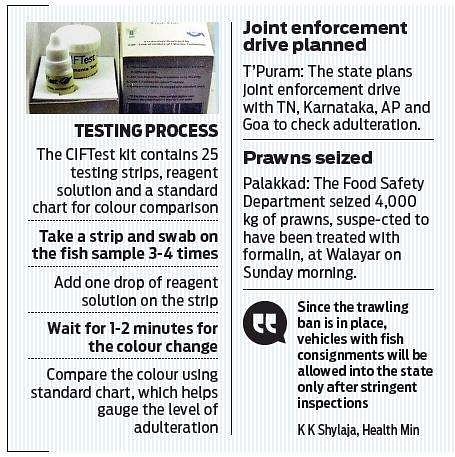 A total of 18,000kg — including 4,000kg on Sunday — was seized in recent days using CIFTest, which helps officers detect the presence of Formaldehyde and Ammonia in fish. Officers said the the State Health & Safety Department, under operation Sagar Rani, has been using the CIFTest to intercept adulterated fish being brought into the state through places including the Walayar checkpost, where it seized consignments from Andhra Pradesh.

The shortage of fish caught in the state due to trawling ban has resulted in vast quantities of it being brought from across the borders.“Special emphasis was given to make the kit non-destructive, simple as well as cost-effective and its method of use consumer-friendly, to suit its use in domestic markets and among food inspectors, regulators and the general public,” said ICAR-CIFT, Kochi director C N Ravishankar. The kit consists of paper strips, reagent solution and standard chart for comparing results.

Kerala Food Safety Commissioner M G Rajamanickam said, “We’ve intercepted about 20,000kg of adulterated fish brought into the state since the trawling ban began. The CIFTest ensures our teams are able to analyse the samples in real time.”

Kerala Food Safety commissioner M G Rajamanickam said vigil will be stepped up within the state after the trawling ban ends.As fish is perishable, what many fail to realise is heavy adulteration goes into it to increase its shelf life, in turn affecting the health of consumers. The constant ingestion of these chemicals results in serious health issues like stomach pain, vomiting, coma and even death. Moreover, formaldehyde is carcinogenic.

CIFT plans to float a tender to mass-produce the CIFTest to bring down the cost, which currently stands at about Rs 2 per test. Ravishankar believes once the common man becomes equipped with a basic screening tool, the traders will be forced to stop adulteration.

Kerala witnesses 160 loads of fish being brought in daily, mostly from Tamil Nadu, Karnataka, Goa, Maharashtra, Gujarat and Andhra Pradesh through the borders of Thiruvananthapuram, Poovar, Amaravila, Walayar and Kasargod.

Now we are on Telegram too. Follow us for updates
TAGS
contaminated fish Adulterated fish