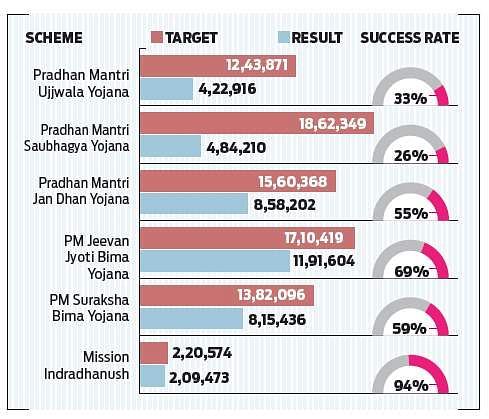 NEW DELHI:  The Centre’s Gram Swaraj Abhiyan, launched to ensure outreach of social welfare schemes to rural people doesn’t seem to have yielded the desired results and only Mission Indradhanush has given satisfactory results. Rural women and children are vaccinated under Mission Indradhanush. The Gram Swaraj Abhiyan was launched by Prime Minister Narendra Modi in Chhattisgarh on April 14. The Prime Minister had claimed that its sole intention was welfare of people and to drive home this point, the Centre claimed that poll-bound Karnataka had been left out of the project.

However, experts say the project, under the garb of outreach was a purely political move. “No government will tell you explicitly that they are doing something to woo voters. The timing of the project is very crucial. After the Supreme Court verdict on the SC/ST Act, BJP needed to woo Dalits back into their fold. So, the project was launched on Ambedkar Jayanti. Also, the BJP has one eye on the 2019 polls,” political analyst Nilanjan Mukhopadhyay said. Ministry officials say the government also extended the project by a week to ensure targets were met.

“We extended the deadline, but the confusion between the verification of beneficiaries and implementation of the scheme cost us valuable time and hence our targets could not be achieved,” a ministry official said. According to ministry officials, only 33 per cent of the target households were covered with respect to the Ujjwala Scheme and under the Saubhagya scheme, it was even lower at 26 per cent. The Ujjwala scheme provides LPG connections to rural households while the Saubhagya scheme aims to provide electricity to rural households.

Officials also said results of the Pradhan Mantri Gram Sadak Yojana and Pradhan Mantri Awas Yojana (Gramin) were also poor. “The two schemes could not achieve their targets because the verification of beneficiaries took time and the process of laying roads and building houses is lengthy. We do not want to fool people by saying that the scheme has been implemented even though the work is only half done,” the official said. Rural experts said the government’s targets were unrealistic. “The government had set targets way beyond their capability to achieve them. If they really had outreach in mind, they would have set attainable targets.

By launching such projects and not reaching targets, they are only wasting the exchequer’s money and also not getting their schemes to people,” said Aniket Bhavthankar, Professor, Rural Studies, Symbiosis International University. The schemes which saw somewhat satisfactory performance were the Indradhanush scheme with 1,66,863 children and 42,610 women being immunised as against the target of 1,75,880 children and 44,694 women. The success rate of the immunization drive was 94.3 per cent. In case of the Pradhan Mantri Jeevan Jyoti Beema Yojana, which aims to provide a life insurance of Rs 2 lakh at a premium of Rs 330 per year, a success rate of 69 per cent was achieved. As against the target of 17,10,409 individuals,the scheme reached 11,91,604 people.

Now we are on Telegram too. Follow us for updates
TAGS
BJP PM Modi Dalits Mission Indradhanush Gram Swaraj Abhiyan

India dismissed for 219 in third ODI against New Zealand

China has warned US officials not to interfere in its relationship with India: Pentagon