Poor awareness of antibiotic misuse in India a major concern

Threat of anti-microbial resistance ranks along with climate change and terrorism, says study 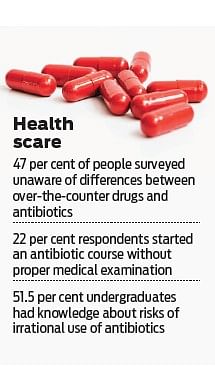 NEW DELHI: Rapidly increasing anti-microbial resistance (AMR), largely because of irrational use of antibiotics, has been a major cause of concern in India. Yet, awareness among people regarding this is abysmally low.A study by a central laboratory recently found that 47 per cent of the people surveyed were unaware of the differences between over-the-counter drugs and antibiotics.This augurs ill for the health of the country as rising number of Indians are falling prey to AMR. The World Health Organisation projects 700 deaths per day globally due to AMR and predicts 10 million deaths a year by 2050, a number far greater than that for cancer.

The first-of-a-kind study was done by the Council of Scientific and Industrial Research-National Chemical Laboratory with a sample size of 504 individuals from a cross-section of society and varied educational backgrounds. One in five respondents bought medicines without prescription and one in 10 did self-medication, said the analysis done by scientists Deepanwita Banerjee and Anu Raghunathan. Twenty-two per cent of respondents had started an antibiotic course with just a phone call to the doctor without proper medical examination.

“AMR is a threat that ranks along with climate change and terrorism. Antibiotic resistance occurs when an antibiotic has lost its ability to control bacterial growth effectively even in therapeutic concentrations. This phenomenon can turn back the clock on decades of progress in modern medicine and return us to a pre-antibiotic era,” the study emphasises.

The study revealed unawareness among 30-40 per cent people regarding the difference between bacterial and viral infections and the futility of using antibiotics for the latter. The majority did not realise the risk of skipping a dose or not completing the course of prescribed antibiotics. The percentage of population buying antibiotics over the counter is alarming and shows severe laxity, highlighting the need for stringent policies to restrict the supply system.

The knowledge about risks of irrational use of antibiotics was least among undergraduates (51.5 per cent) and highest among postgraduates (90.6 per cent). “The highest number of consumers of antibiotics was the educated population—58.8 per cent  undergraduates, 75.5 per cent graduates and 69.1 per cent postgraduates compared to 30.8 per cent uneducated respondents,” the study states.The study prescribed educational campaigns and stewardship and surveillance at the national level for prudent antibiotic use among Indians.

Now we are on Telegram too. Follow us for updates
TAGS
antibiotics

Half of India’s 45K Covid deaths in Kerala alone