Also, with tourism sinking its venomous fangs into their century’s old habitation, the traditional life is endangered.

Modernisation is a good thing until it begins to wipe away history. In a far away land, surrounding the Omo river in Southern Ethiopia, are a group of lost tribes that are scurrying for survival. The river that helped them flourish since eternity is now floundering in support because of the hydroelectric Gibe III dam project feeding commercial modern plantations. The primitive way of life faces threat. The construction of the dam has altered the course of tribal existence.

Also, with tourism sinking its venomous fangs into their century’s old habitation, the traditional life is endangered. Thousands of miles away, taking these things into congnisance was wildlife biologists Dr Latika Nath. As she was searching for the Ethiopian wolf, the rarest of its kind in the world, she became equally interested in the Omo way of life. Nath became hungry to know more. She immediately drowned herself into research and committed herself to unravelling their mysteries. Omo- Where Time Stood Still, is an exhibition of photographs that she took during her visits to the Omo valley, bringing an ancient civilization closer to our modern one.

Her works capture an important moment in history. The transition from tradition to new age escapes. “The tribes are dying out. There are less than 20,00,00 in all, while some are down to a few thousand. Youngsters are getting integrated into the main stream. Development is changing their world,” says Nath. 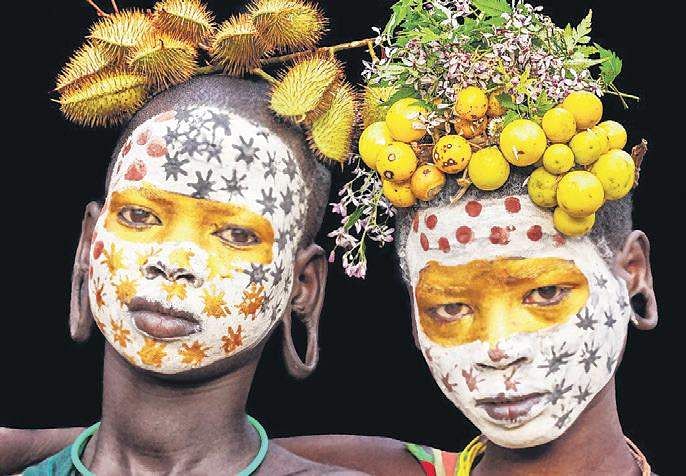 Besides the threat of the dam, brazen intrusion of tourism into their private space is a huge challenge. Extensive usage of artificial lights, encouraging photos in exchange of money, insensitivity towards cultural systems, and disrespect for fragile ecosystems, has begun to change the behaviour of the tribal communities.

The show is supported by The Embassy of the Federal Democratic Republic of Ethiopia, New Delhi. Through her 150 images, one gets a glimpse into the eccentricities and peculiarities of a culture that needs understanding for long-term survival. “I have learnt that there are many worlds on this one earth. Our world in Delhi is our reality and has nothing to with the world the Omo tribes live in. Yet, in mysterious ways, the worlds affect each other, and humans impact the earth in unbelievable ways,” she says.

Studying tribes such as Hamer, Bana, Mursi, Suri, Kara, Dassanech, Arbore and Nyangatom, Nath made their land her home. Her time their resulted in 60,000 images that served as a bank for images that one doesn’t ordinarily see. Body scarification and decoration, lip and ear plates, blood drinking men, anomalous rituals and ceremonies, and unique architecture, Nath captured it all.

In fact, she also chronicled the relevance of AK 47 rifle and other guns in their lives. “Guns are used to hunt, to protect cattle and to settle scores. The price of a bride today can be 35 cattle and one AK 47. The conflict in Sudan and Somalia have created a trade in guns. Bullets are so common that many tribals wear jewellery designed from empty bullet casings,” she says.

She recalls how during a donga (stick fight), while she was photographing, a member of the local militia saw someone he thought had stolen his cattle and started shooting randomly. Nath was shot during this furious encounter but she escaped. A collection of her imageries will be included in a five volume book series scheduled for launch at the Jaipur Literary Book Festival 2019.

She is fully aware that while photographs serve an important role, they cannot capture reality in its entirety. However,  the things she experienced—women being whipped, genital  mutilation, body scarring, men drinking blood as a source of protein—all of it finds a mention. “It was also fascinating to see their homes made of grass, wood and lined with skins, with some built on stilts. Each tribe designs its village differently.

The Dassanech group of people use scrap metal sheets and plastic. The Nyangatom build elaborate double story homes on stilts and make a maze of fences around the houses to deter attacks from invaders. “The architecture in Konso was also incredible and constitutes a spectacular example of a living cultural tradition stretching back 21 generations, adapted to its hostile environment, comprising of terraces and stone walls,” says Nath, who has after her documentation of the Omo people, understood one thing: the impermanence of life. And when everything is bound to change, photos make them permanent, at least in the moment they were captured. Till November 12: 10.30 am to 6.30 pm, at Bikaner House, Pandara Road, India Gate.

What’s in it?
The photos in the exhibit serve as a bank of images that one doesn’t ordinarily see. These include body scarification, lip and ear plates, blood drinking men, anomalous rituals, unique architecture, relevance of AK 47 rifle and other guns in their tribal lives.