Winds of change sweeping through judiciary

NEW DELHI: Justice Ranjan Gogoi, who completed one month in office as Chief Justice of India (CJI), is a satisfied man, as many of the administrative changes he brought about in the short span of time, have started yielding results. For instance, Court Number 1 always saw a host of lawyers, litigants, interns, clerks and journalists crowding it. However, since the day Justice Gogoi took over, things have changed for the better and there is less overcrowding. The first thing the CJI did was to stop out-of-turn listing of cases which took nearly an hour at the beginning of each work day and resulted in delays in other hearings. 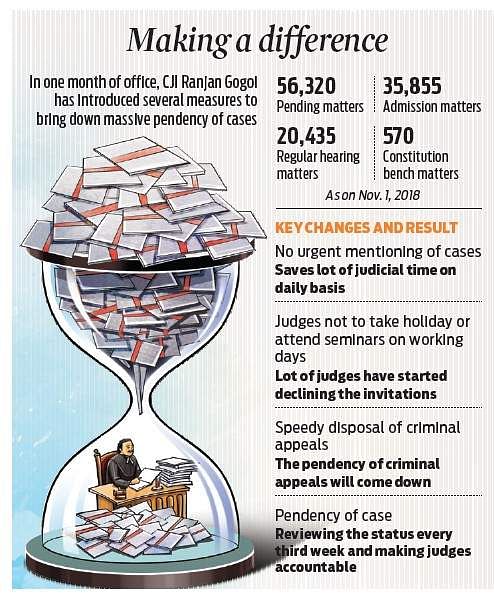 Justice Gogoi also ordered listing of criminal matters every Wednesday and Thursday before at least five Supreme Court Benches for early disposal. Earlier, on an average, 1,000 fresh cases were filed every week for hearing on Monday and Friday, which meant a little over 40 cases each to handle for the 11 functioning Benches.

But with the recent appointments taking the present strength of judges up to 28 from the earlier 24, 14 Benches will be available to dispose cases swiftly.

The CJI also asked chief justices and senior high court judges not to take leave on working days in an effort to reduce the massive pendency.

He also discouraged judges from attending seminars on working days.“The Indian judiciary is facing a tough time, but with these little administrative changes, I am hoping change will be visible soon. Discipline of judges is another area that we should work on to achieve targets,” said senior advocate Amit Sharma.

The CJI also took note of the fact that many judges do not read case files before coming to court. He made it clear to all HC chief ustices of all HCs that this work culture would have to change with immediate effect.Ever mindful of the huge backlog of 3 crore cases, Justice Gogoi is also reviewing the pendency status every third week.

Now we are on Telegram too. Follow us for updates
TAGS
Chief Justice of India Ranjan Gogoi