Arms and the candidate: Netas in Madhya Pradesh prize guns

School education minister Kunwar Vijay Shah, who is the tribal face of the government has a revolver, a rifle and a .12 bore gun, all worth Rs 50,000.

BHOPAL: In Madhya Pradesh aka ‘Shanti Ka Tapu’  (Island of Peace), guns, shotguns, rifles, pistols and revolvers enjoy pride of place among the prized possessions of both top ministers of the Shivraj Singh Chouhan government as well as senior Congress leaders.

According to the affidavits submitted by candidates along with nomination papers, both rifles and revolvers seem to be the prideful possession of several politicians, including 12 present ministers, who already enjoy official security.

Around 38% of ministers of the 32-strong Shivraj Singh Chouhan government have declared in their affidavits to be having licensed firearms. Chief Minister Shivraj Singh Chouhan, six other Cabinet ministers and five Ministers of State (MoS) have guns. The CM himself possesses a revolver.
While parliamentary affairs and public relations minister Narottam Mishra owns a revolver worth Rs 75,000, home minister Bhupendra Singh has a .12 bore rifle and a revolver worth Rs 65,000. PWD minister Rampal Singh owns a revolver, rifle and a 12 bore gun worth Rs 1.60 lakh. Agriculture minister Gourishankar Bisen owns a Rs 85,000 worth revolver.

School education minister Kunwar Vijay Shah, who is the tribal face of the government has a revolver, a rifle and a .12 bore gun, all worth Rs 50,000.

Minister for new and renewable energy Narayan Singh Kushwah has a .32 bore pistol and a .315 bore Mauser Pistol, both worth Rs 1.45 lakh.

Even several senior Congress leaders have a penchant for guns in the state, which was once known for its lawless Chambal ravines. Congress chief whip in the Vidhan Sabha Ramniwas Rawat owns a revolver, a .12 bore gun and a Mauser. Former minister KP Singh (Pichhore) has a revolver and a rifle.

Ex-union minister Arun Yadav, who is contesting against the CM in Budhni, has a revolver and gun. Vidhan Sabha Deputy Speaker Rajendra Singh has a Smith & Wesson revolver, a .30 bore semi-automatic

US carbine and .315 bore rifle, all presently worth Rs 1.80 lakh.
Sitting BJP MLA from Tendukheda seat Sanjay Sharma, who is now contesting as a Congress candidate, possesses a .12 bore gun, a rifle and a pistol, all worth presently Rs 3.65 lakh. Congress candidate from Bhopal Madhya seat Arif Masood  has a double barrel 12 bore gun, while three-time BJP MLA Mahendra Hardia too owns a pistol. 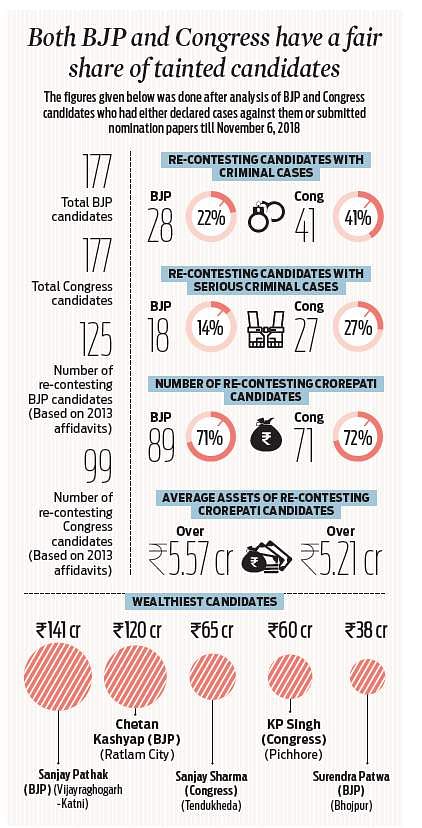