Chhattisgarh women don’t get due in poll tickets

Now, that the ticket distributions are over, the BJP and the Congress are trying to outscore each other by claiming to have allocated more poll tickets for women candidates in the election.

RAIPUR: Women voters outnumber men in 15 districts and in 33 Assembly seats of Chhattisgarh. But, their representation during the previous three elections remained a dismal 9 to 13 per cent — a far cry from the 33 per cent quota in ticket allocation that is often peddled by political parties.

Similarly, when it comes to voting percentage, women are equally enthusiastic about exercising their poll rights. In fact, 77.32 per cent of women voters cast their votes in 2013 compared to 76.93 per cent of men voters.

Of the two main parties, the BJP fared slightly better as it gave poll tickets 15 women — up from 11. The Congress as it nominated one less candidate (13) this year as compared to five years ago.

Now, that the ticket distributions are over, the BJP and the Congress are trying to outscore each other by claiming to have allocated more poll tickets for women candidates in the election. “The BJP has always been in the forefront on ticket distribution to women who are always and relatively more active in Mahila morcha than other party forum. Women are not only held in high esteem not just within the organisation, but outside as well,” said Puja Vidhani, state president, BJP Mahila Morcha

In the Congress ranks, the party couldn’t give that many tickets to female candidates as expected by Mahila Congress president Phulodevi Netam, who nevertheless claimed that the women get more respect in her party than in the BJP. 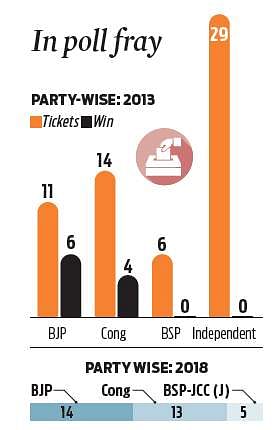