Safety norms not a priority for domestic air carriers

While the aviation industry in India has seen an impressive growth in recent years, instances of violations of air safety norms have also been rising.

NEW DELHI: While the aviation industry in India has seen an impressive growth in recent years, instances of violations of air safety norms have also been rising.
There have been several cases recently where passengers have been put at grave risk as the flight crew has chosen to ignore the government’s norms.

Data released by the Directorate General of Civil Aviation (DGCA) recently, shows that domestic airlines carried 11.5 million passengers during September this year, up from 9.6 million in September 2017 — an 18.95% growth in passenger traffic. 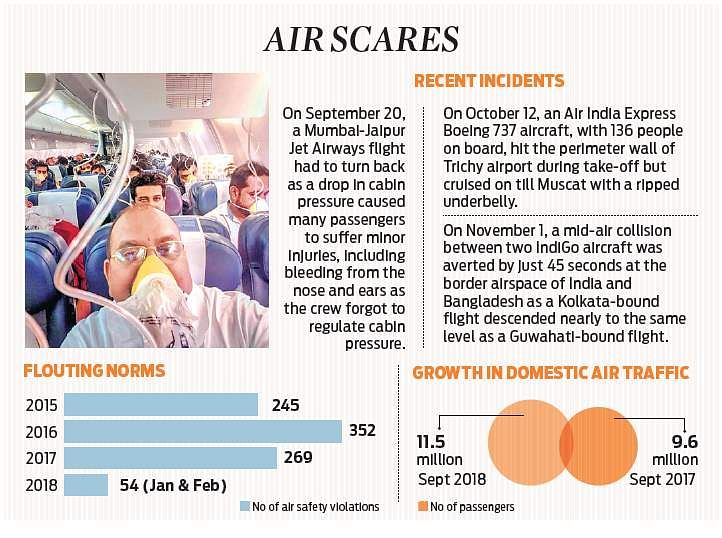 At the same time, data from the Ministry of Civil Aviation reveals 621 instances of air safety norms being flouted in 2016 and 2017. This year, 54 such incidents have been reported in the first two months alone.
Apart from this, 32 cases of ‘in-air near misses’ were reported in 2016 and 28 in 2017.
While the DGCA claims to be taking adequate measures to prevent such instances, experts say many guidelines remain only on paper.

“In India, air safety measures are mostly on paper. We are having too many near misses incidents. How can you ignore cases like the Air India Express flight from Trichy when the aircraft flew with a ripped underbelly? This is a serious matter and the authorities should take adequate measures,” said Yeshwant Shenoy, who has also filed a Public Interest Litigation (PIL) in the Delhi High Court on the issue of aviation safety.

While hearing Shenoy’s plea, the HC directed the DGCA in April that flight hours for pilots should be limited. It also said that the civil aviation regulator was bound to comply with the provisions of the various laws governing aviation and must specify the maximum and minimum flying hours for flight crews according to the prescribed the flight and duty time limitation, the court said.
An official of the civil aviation ministry said the DGCA has started the Safety Oversight Programme which includes surveillance, regulatory audits, ramp inspections of domestic operators, surveillance of foreign aircraft etc. It also ensures that all operators are complying with the regulations for safe operation of the aircraft.

Moreover, the DGCA has issued regulations which are in line with the International Civil Aviation Organisation (ICAO) norms. These regulations are periodically revised to keep pace with international practices and to meet ICAO standards.

Now we are on Telegram too. Follow us for updates
TAGS
Domestic Airlines Safety on Plane