According to water resources ministry, they are unable to find land adjoining to Panna Tiger reserve.

NEW DELHI:  Country's  first river interlinking project connecting Ken and Betwa rivers to provide water to Bundelkhand region in UP and Madhya Pradesh is back to drawing board with Union water resources ministry approaching the ministry of environment and forest to relax conditions imposed as part of forest clearance accorded in May 2017 for diversion of forest in the Panna Tiger reserve (PTR). 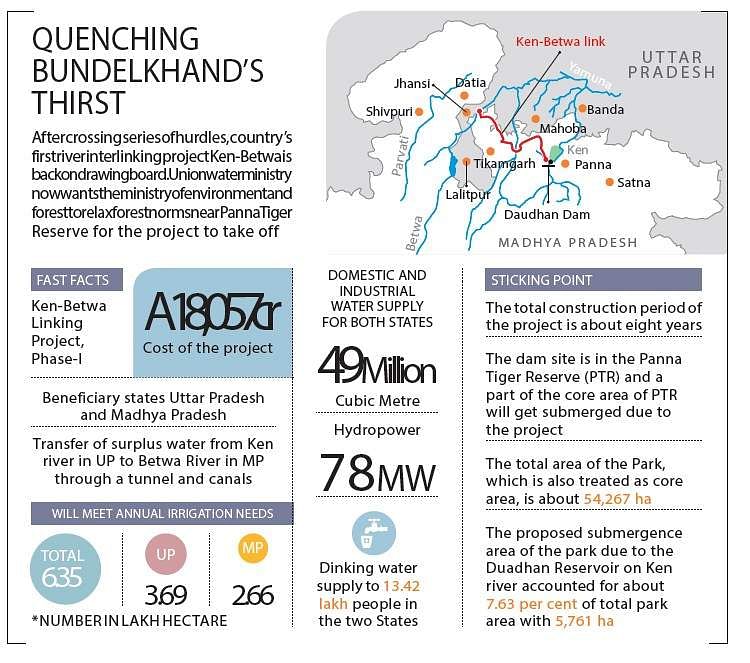 The problem before the water resources ministry, which is implementing the project, is one of the conditions imposed by the Forest Advisory Committee (FAC) while according Stage-I clearance to the project. The committee had recommended that the project proponent and state government should consider equivalent non-forest area (6,017 ha) adjoining to PTR from the revenue and private land and add to the PTR as a part of core/corridor (for tiger movement) with other areas or satellite core area.

According to water resources ministry, they are unable to find land adjoining to PTR.

“The land adjacent to PTR has many villages and we can relocate those villagers just for expansion of PTR. We cannot provide land adjacent to PTR,” said source in the water resources ministry. “The ministry has now asked the environment ministry that whatever land adjacent to PTR we can get, we will give. For rest, we are allowed to give double the degraded forest land for carrying compensatory afforestation. We want relaxing partly one of the conditions.

Based on our communication, now joint verification is happening at PTR,” the sources added. The damage the project can cause to big cats was highlighted by the environment ministry committee in March 2017, saying Panna is emerging as an important source population of tiger in the entire landscape and the proposed project will certainly cause alarming habitat loss and fragmentation to the entire tiger population in the landscape.