When she was rescued, she was found suffering from progressive blindness, arthritis, degenerative joint disorder and other problems in her feet.

NEW DELHI:  After having spent more than 40 years in captivity and negligence, Priyanka celebrated her first year of freedom. A victim of wildlife trafficking and exploitation, the elephant was gifted with a fresh lease of life when it was rescued by Delhi-based NGO Wildlife SOS in 2017.  When Priyanka returned to her enclosure from her evening stroll on the first anniversary of her rescue this week, she had a surprise cake waiting for her, put together by veterinarians and elephant keepers at Wildlife SOS’s elephant conservation and care centre in Mathura.

The healthy cake was prepared with cooked porridge and banana leaves and layered with sliced melons and pumpkins. According to the NGO, the elephant finished the cake in minutes. Her days of starvation and distress behind her, Priyanka now lives a carefree and unconfined life. Decades of captivity and cruel treatment at the hands of its owners had left Priyanka with severe chronic illnesses. 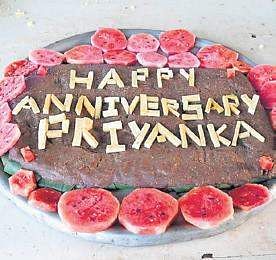 When she was rescued, she was found suffering from progressive blindness, arthritis, degenerative joint disorder and other problems in her feet. “During her preliminary medical examination, Priyanka was found to be undernourished, which resulted in an inward bend in her hind legs. In addition to her arthritic condition, her foot pads needed immediate attention as they were severely worn out,” said Yaduraj Khadpekar, a senior veterinarian at the NGO.

The elephant was rescued over a period of six days last year after being tracked closely for a year by the organisation. The NGO, in collaboration with the Uttar Pradesh Forest Department and the local police, intercepted a group of wildlife traffickers who were renting out the pachyderm for processions and wedding ceremonies.

“It is fulfilling to see Priyanka come such a long way following her rescue. Watching her recover and enjoy the company of other rescued elephants has been encouraging. Perhaps the most heartening part of Priyanka’s rehabilitation is seeing her grow fond of her time in the pool,” said Geeta Seshamani, co-founder and secretary of Wildlife SOS.

Now we are on Telegram too. Follow us for updates
TAGS
Elephant rescued