By Pushkar Banakar and Abhijit Mulye

NEW DELHI/MUMBAI: Lawyers and representatives of the five activists arrested on charges of plotting the Bhima Koregaon violence have slammed the government and the Maharashtra Police for fabricating evidence and misusing the Unlawful Activities Prevention Act (UAPA).

In a nationwide sweep on August 28, the Pune police arrested Varavara Rao, Sudha Bharadwaj, Arun Fereira, Gautam Navlakha and Vernon Gonsalves, but they were put under house arrest following a Supreme Court order. On Friday, the Maharashtra police presented letters, allegedly written by Bhardwaj, which mention that Navlakha was in touch with Kashmiri separatists. 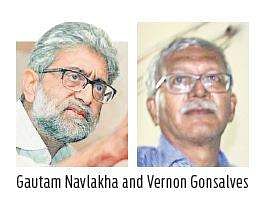 A day after Bhardwaj described the letters as fabricated and concocted, Navlakha’s lawyer and senior advocate Nithya Ramakrishnan warned that “when a country’s administration loses sight of, or in fact deliberately obfuscates the difference between, the democratic and the criminal, the time comes for every thinking person to oppose this trend. It is utterly pernicious.”

Responding to the letters released by the Maharashtra police, she asked: “Where is the UAPA element in that? Was Navlakha not employed by the State to secure the release of abducted officials precisely by getting in touch with extremists in Bastar in 2012? Most of the political elements in this country, at least in national politics, have spoken to or been in contact with Kashmiri separatists. Are they all in custody? Which part of UAPA criminalises such contact? The UAPA and the penal laws operate in clearly demarcated fields, against specific acts, not against opinions and acquaintanceships.” The media must expose the government as the latter would be targeted next, she warned.

Advocate Susan Abraham, the wife of Vernon Gonsalves who is under house arrest in Mumbai, says the arrests were aimed at diverting attention from the actual perpetrators of violence. “The first FIR lodged in the Bhima Koregaon violence had named Sambhaj Bhide and Milind Ekbote. But, the government doesn’t want to act on that FIR and wants to divert attention, hence it has been arresting the activists,” she told The Sunday Standard.

This was also done to divert the attention of the people from the Nalasopara arms haul case where the Sanatan Sanstha is suspected to have been involved, she claimed.

“The ATS had got explosives, bombs, arms… everything, and yet the Sanstha is not declared an unlawful activity. This shows the bias,” she said. “Pune police have stated 18 reasons in remand application but, there is not a single mention of any letter or procurement of arms. This kind of maligning of the accused is being done even when the matter is in the domain of the court is illegal and is being done to divert people’s attention,” she added.

Dr Anand Teltumbde, whose name was added in the FIR as accused by the police recently and whose house at the campus of Goa institute of management was raided in his absence, has also condemned the act.

“Police is acting at the instance of the government to malign the innocent citizens who are exercising their fundamental rights,” said former SC Justice (Rtd) P B Sawant.

After salons refuse service to Dalits, brothers step up and offer haircuts at doorsteps in Karnataka

Government committed to ensure adequate availability of vaccines; all need to work together in COVID-19 fight: PM