The modern approach to keep a watch on activities over riverside belts whereby illegal acts of sand mining are done will hopefully lead to more culprits being caught.

Drones and satellites keep watch on sand mining
Bihar will keep a watch on illegal sand mining using drones and satellites. Chief Minister Nitish Kumar on Friday asked the officials of the department concerned to take services of these two facilities. The modern approach to keep a watch on activities over riverside belts whereby illegal acts of sand mining are done will hopefully lead to more culprits being caught. Kumar also asked officials to protect the mountains of historical and archaeological significance from stone-miners and illegal stone-crushing units. 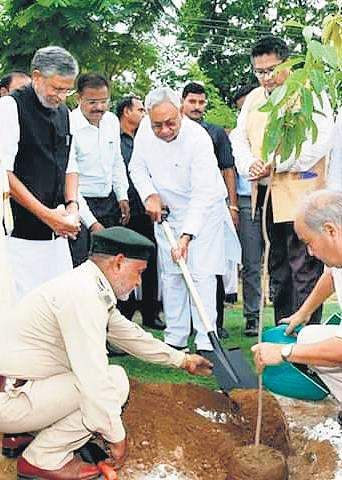 It was said that only 54% of babies get breastfed until six months of age. Arjuna Awardee and Goodwill Ambassador of Poshan Abhiyana (Nutrition Campaign) Shreyashi Singh kicked-off the workshop and stressed on the need of enhancing per cartage of newborn getting breast milk. She requested both central and the state government to build ‘breastfeeding-corners’ at public places, including railway stations, bus stands, across the state on the same mission mode that toilets have been built.

Over 1.5 crore saplings to be planted in 15 days
In a bid to raise green cover over Bihar from existing 15% to over 17%, over 1.5 crore saplings will be planted across the state under a fortnight-long ‘Van-Mahostsava’, started by Chief Minister Nitish Kumar and deputy CM Sushil Kumar Modi, from August 1 to 15. Kumar said that every citizen of the state has a moral right to enhance the green cover of the state by plating at least 10 saplings. This was for the first time that state government has organised such a ‘Van-Mahotsava’.

Lightning detection system in the offing
The state disaster department, led by principal secretary Pratayay Amrit has decided to install Lightning Detection System across the state by the end of this year. He said a US-based firm –‘Earth-Network’ has been consulted after a meeting held on Thursday. Quoting figures, he said, as many 180 people were killed due to lightning in Bihar in 2017 followed by 139 in 2018 and nearly 150 in the first six months of the current year. Nation-wide, 2,000 people die due to lightning strikes every year. As per a figure, from 2000 to 2014, nearly 32,743 people were killed due to lightning in India.

Now we are on Telegram too. Follow us for updates
TAGS
Patna news Nitish Kumar Patna Diary