Arun Jaitley, an astute strategist responsible for BJP’s rise, breathed his last at AIIMS; as the finance minister he gave India GST and IBC.

In 2009, he and Sushma Swaraj were seen as the BJP’s Gen-Next leaders.

They were earlier brought to the political centre stage by party patriarch L K Advani. But in a twist of fate, both exited the world in a matter of 18 days.

An astute strategist who worked behind the scenes to fuel the rise of the BJP, he rose from the lower rungs of the RSS, having been the Delhi University Students’ Union president as an Akhil Bharatiya Vidyarthy Parishad activist.

Jaitley soon rubbed shoulders with tall leaders after taking the plunge into politics during the Emergency. In less than three decades, he was a Cabinet minister in the Atal Bihari Vajpayee-led NDA government.

A food connoisseur, Jaitley seemingly had a tough time dealing with his diabetic condition, which ultimately made him opt for bariatric surgery in 2016. 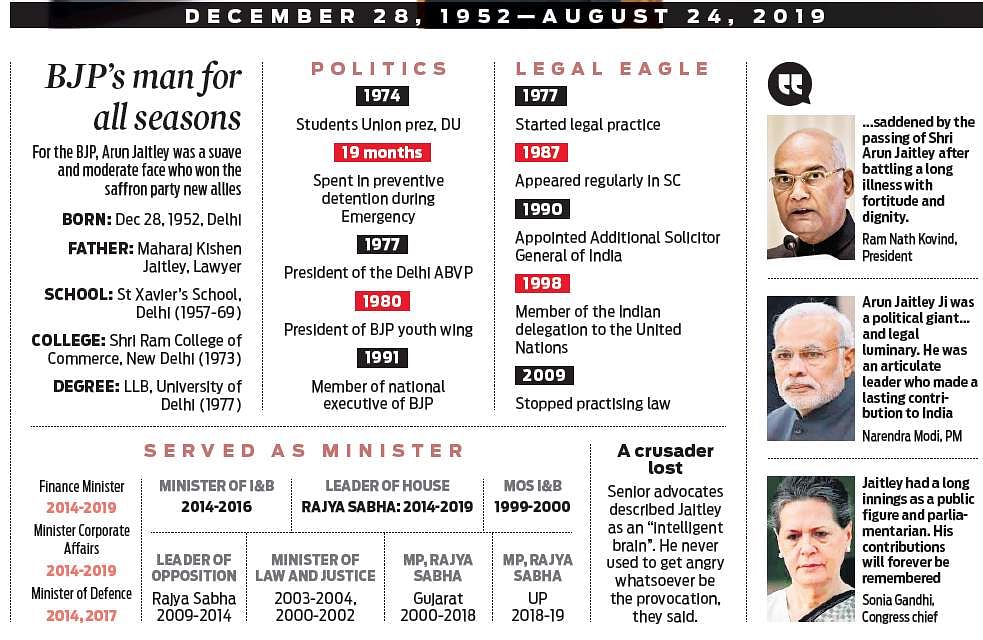 But his health condition even after the surgery remained challenging, with the detection of a soft tissue cancer in 2018.

His deteriorating health forced him to opt-out of the Modi Cabinet in the second term. On August 9 after a bout of breathlessness, he was admitted to AIIMS, where he breathed his last.

A lawyer par excellence, Jaitley brought deep legal insight for the BJP and senior party leaders during the two-and-ahalf decades of bitter political rivalry with ruling dispensations at the Centre.

He proved to be an impregnable legal shield for both Prime Minister Narendra Modi and Home Minister Amit Shah when they were pursued by investigating agencies during the UPA regime.

Within the BJP, Jaitley fast emerged as a strategist after Advani drafted him into his core team in the early 1990s.

He scripted the alliance between the BJP and the Janata Dal (U) to wrest power in Bihar in 2005. During this time he was also the party’s in-charge of Gujarat, which coincided with the emergence of Modi as a national leader. Indeed, Jaitley was among the few who threw his weight behind Modi when he was the state Chief Minister.

Shah was regularly seen at Jaitley’s office when he was being pursued by the CBI in the Sohrabuddin encounter case. Jaitley was a master of political one-liners.

Among his famous ones is the “tyranny of the unelected,” a reference to Rajya Sabha members who continuously stone-walled government legislative business in the Upper House during the first Modi government.

This articulation was used by the BJP to launch a scathing political campaign against the Congress to brand the Opposition party as a compulsive naysayer. Jaitely proved his administrative mettle first as the Commerce Minister in the Vajpayee government and later as the Finance Minister under Modi.

In the government and in the party, Jaitley remained “Mr Dependable” for Modi and Shah. Among his many attributes was spotting talent, the two best examples being Nirmala Sitharaman and Bhupendra Yadav. Jaitley revelled in talking politics, which he did with ease during long sessions with journalists and fellow political leaders.

He had many tales to tell.

When it was decided that all top guns of the party would contest the Lok Sabha elections of 2014, Jaitley chose the Amritsar constituency in Punjab.

This was his first test on the electoral arena, but it proved to be a miscalculation as it ignored the fact that a Hindu candidate in Amritsar spurs a counter Sikh vote polarisation. Additionally, he ran into Captain Amarinder Singh, the Congress’ tallest leader in Punjab.

The election verdict delivered a rare defeat for Jaitley. Yet, Jaitley didn’t nurse any enmity towards his political slayer.

Man with a heart of gold Jaitley legally bailed out many political leaders, even those sharply opposed to the BJP. He would serve them with bills mentioning `0. This magnanimity held him in good stead later.