Protest posters on fleek since 1971

A recent show on pamphlets and posters by India’s dissenting voices since 1971 was prematurely de-installed. The curator tells us more.

In the ongoing anti CAA-NRC protests across India, posters are writing a new narrative. While none of these peoplehave faced any sort of censorship, the curator of a recent exhibition on students’ protests (1970s-till present) did – the show was instructed to be de-installed from a venue in Delhi.

“The exhibition had displayed student’s pamphlets and protests among other media. Some of the students and faculty members were unhappy about it and there were complains,” says the curator choosing to stay anonymous, given the backlash.

It was some five years ago the curator had started collecting material for the show. The show included archives from the campuses of Jawaharlal Nehru University, Hyderabad Central University and Osmania University among others. There were also interviews with activists engaged with student politics during emergency and when gender issues started making foray into universities. 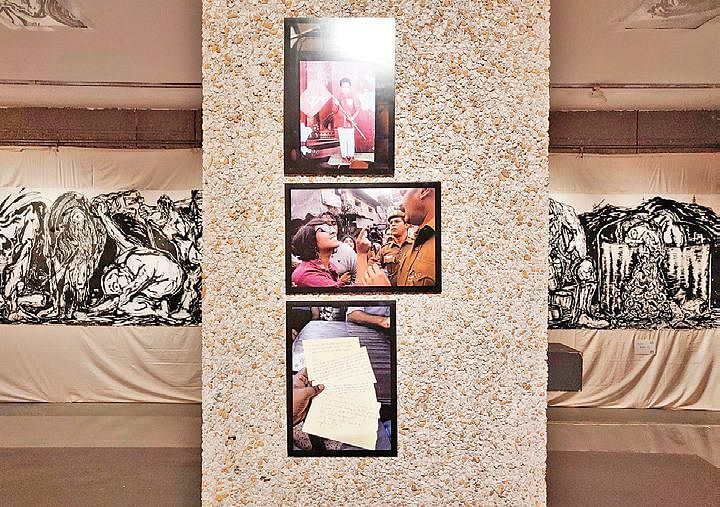 “The idea was to reflect on the importance of pamphlets in student politics as objects of mobilisation while looking at them as a language to show dissent,” says the curator, adding, “It was to take the visitors into the ideas and ideologies that emerged from the campus politics. We were also interested in tracing the evolution of pamphleteer discourse from paper form to online.”

The exhibition had covered posters made on the 1971 emergency, the arrival of Mandal Commission in 1979, Dalit politics, reservations, Ram Mandir issue, and so on. The voices covered both left and right ideologies (including ABVP and RSS) and also vernacular languages such as Urdu, Bangla and Telugu apart from the dominating Hindi and English. According to the curator, student compositions have evolved in the campuses with people from deprived sections marking their presence. “They brought a difference in the dominant narrative by being conscious of their rights. That’s how the vernacular entered.”

The curator also talks about the history of pamphlets, and how these were a rarity. “Only few people designed it and the overall cost was high. The Age of Reason, by Thomas Paine, is one important book that also gives insights into the tradition. But now the pamphlets and posters have become an individual narrative. It reflects the larger trend towards individualised political expressions.”

For instance, the image of a Jamia student warning the cop who was beating her colleague has become iconic to the student protests’ and turned into a poster. The curator also cities other examples from the ongoing protests that were personally witnessed. Like spotting one student protestor at Jantar Mantar using George Orwell’s 1984 as a poster. “He was walking around with it, reading the book at some places within the periphery of the area and also using it as a placard. Another had a play of words that called Amit Shah, Tana Shah. I found the posters at the current protests humourous, meme-like, visually attractive and highly engaging.”

According to the curator, campuses articulate solidarity between communities commonly referred to as liberal network. “It goes beyond certain communal circles. We often hear these are Muslim-led protests in Delhi or tribal-led protests in Assam, but none of this is accurate. What is accurate is that students are able to mobilise around a set of ideas, and right now secularism is one of those.”

Now we are on Telegram too. Follow us for updates
TAGS
Citiznehsip Act protests NRC