One sent on December 12 referred to the intermittent blocking of internet access to the high commission, and the blocking of Indian government sites, including the ministry of external affairs and one used by Pakistanis to apply for Indian visas. Another sent on December 23, referred to the intimidation of the deputy chief of mission JP  Singh and three other Indian officials in Peshawar on December 21 by two motorcycle-borne ‘agency’ goons, forcing them to return to Islamabad.

Yet another sent on December 27 referred to a four-hour power outage at the residence of the Second Secretary Akhilesh Singh on Christmas, causing “a lot of inconvenience to the family members (including children) of the officer...It was noted that there was no electrical fault at the residence... and power supply was cut off only at his residence.”

READ | Harassment of Indian diplomats in Pakistan: India not planning to scale down staff

And despite the chest thumping in Pakistan over having decided to open the Kartarpur corridor for Sikh pilgrims from India, Indian consular officials, including High Commissioner Ajay Bisaria, were prevented on three occasions from meeting Sikh pilgrims visiting shrines in Pakistan.

Then there are long-standing gas connections for residential housing complex opposite the chancery. “We had applied for a gas connection 10 years ago with SUI gas limited. Over the years Islamabad has a piped gas system, and they have put in the pipes. But they are yet to turn on the tap,” said a source. “We have been pursuing this for three years, but it has become more urgent now because people have moved in, and they are dependent on this not just for cooking, but also for heating in winter,” he said.

“All that is required is for the gas company officials to conduct a safety audit, and turn on the tap. But they are waiting for clearance from the Pakistan foreign office.”  Then there’s the overall completion of the housing project, which was started 10 years ago to accommodate high commission officials, many of whom stayed outside in rented houses. 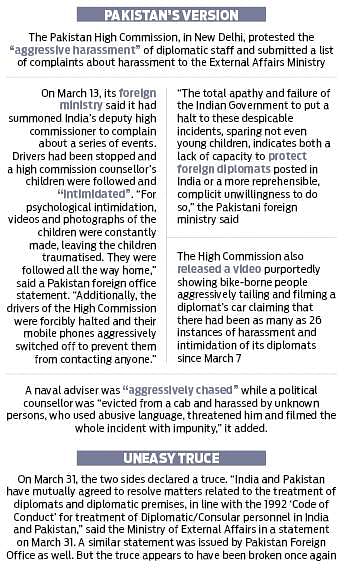 “Now the complex is ready, but there are still several issues. For instance, to install a security gate at the complex, the equipment has reached, but the company which supplied it from India now needs to send its technical staff to get the gate installed. Their visas are pending for over three years,” said the source. “When we pursued the case, they were again asked to apply for fresh visas. It was more than a few month ago, and nothing has moved. There have been several cases of people ringing the doorbells of officials at unearthly hours and running away.”

There is not even a legal occupancy certificate or a permanent power connection for the complex. “They have provided a temporary connection, and this was disconnected in February last year, and it took a lot of persuasion from our side to get re-connected. But it is a temporary one, which can be disconnected at their whims,” he said.

More than 40 officials and their families now live in the new complex.  After the Peshawar school attack, all children of Indian staff in Pakistan were brought back, but it is still a family posting for those without schooling requirements. Incidents of people following Indian staffers closely, including even those visiting toilets, and sitting close during meals outside the mission are routine. Some of them are quite aggressive. Visitors coming to meet Indian staffers are harassed and intimidated .

“As for Indian High Commission officials getting access to Sikh pilgrims visiting Pakistan as per diplomatic norms, they have barred it three times. But while in April and in June, they had simply insisted that our officials turn away and go back to Islamabad, in November, when our pilgrims were there as part of Guru Nanak’s birth anniversary celebrations, the agency even threatened our diplomats... This despite our officials having acquired clear written permission from the Pakistan foreign office for these visits,” he said.

On the other hand, when Pakistani pilgrims came to India, their protocol officer received them at the border, were with them throughout the journey. With both the prime minister and the army chief having stated a desire to improve relations with India, one would have expected some changes on the ground. “Instead we are seeing increasing harassment and intimidation, and the situation is worsening,” the source said.

More from The Sunday Standard
Now we are on Telegram too. Follow us for updates
TAGS
Indian diplomats in Pakistan Indo Pak ties pakistan