Conservation of 500-year-old Subz Burj is halted as ASI objects to the restoration work done by Aga Khan Trust for Culture.

NEW DELHI: Green glazed tiles, on the top of elongated neck dome of the 500-year-old mausoleum located on a traffic island next Nizamuddin police station, lent its name to the monument — ‘Subz Burj’ (Green Tower).

In her book, ‘The Forgotten Cities of Delhi’, author Rana Safvi says HC Fanshawe, renowned history writer, also called it ‘Sabz Posh’ in 1902 because of the colour of its dome.

A booklet on historical buildings in Delhi published by the Archaeological Survey of India (ASI) too describes the tomb as Sabz Burj, which once had beautiful patterns of green, yellow, and blue thin baked-clay slabs on its high-drum.

However, when the Survey carried out its conservation in 1986, blue tiles were installed on its dome due to which it is sometimes referred as ‘Neeli Chhattri’ (blue dome).

These blue tiles have now become a bone of contention between the ASI and Aga Khan Trust for Culture (AKTC), which was given the task to preserve this pre-Mughal era sepulcher.

The conservator is seeking removal of blue coverings to undertake ‘proper’ conservation and arrest water seepage damaging its ceiling and intricate artwork, which is hidden under the thick layer of cement mortar, placed more than 100 years ago.

Due to the differences between them, preservation of the Subz Burj which was supposed to be completed by December last year, is at standstill since May 2018. The work was initiated with much fanfare in January 2018.

Apart from restoration work, the tomb is expected to be illuminated by Havells India Limited, which has joined hands with AKTC and funding the project.

A senior official of ASI said before deciding on removal of tiles, we want examination of the building by the Central Building Research Institute (CBRI), Roorkee to assess exact damage and its reasons. 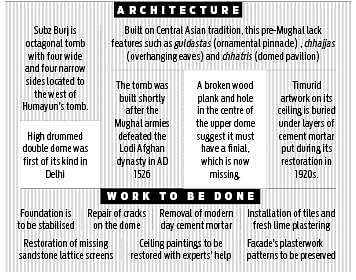 “According to them (AKTC), water seepage is causing ceiling’s deterioration hence they want to remove blue tiles from the dome. We have sought help from the CBRI.

"A team of the institute has already examined the monument. Soon, they will conduct second round of inspection. Any decision regarding dismantling of tiles will be taken after CBRI’s report,” said the official.

Ratish Nanda, chief executive officer (CEO), AKTC, however, said tiles need to be dismantled to check cracks or structural damage so that measures could be taken to prevent percolation because significant portion of the ceiling has already been lost due to water trickling down through the dome.

“In May 2018, we requested the ASI for permission to extricate the tiles installed in 1986 with cement mortar as it is clear through thermal imagery that this layer is impervious. Since my first request, we have held several meetings with the ASI officials. Now, the ASI has sought a report from the CBRI. The report is awaited. Therefore the work is stalled,” he said.

Conservators say tiles placed by the ASI 33 years ago, look like ordinary ceramic pieces, which are generally used in bathrooms.

Nanda said these will be replaced by hand-made tiles similar to the original ones, made by locals using old techniques, at AKTC’s workshop.

“Each hand-compressed piece is shaped and sized with precision to fix into a specific vacant space as it has been there originally. Because, we have lost the art of Mughal tile making, Uzbek craftsmen were invited to train local youths of Nizamuddin Basti for tile-making. Locally made tiles were used in conservation of Humayun’s tomb and initial work at Subz Burj. Those tiles are not only decorative, but also protect the structure from water,” said Nanda.

As the project is stopped, Nanda is worried about the structure’s safety in the monsoon.

“We are going to wrap the dome in plastic to ensure no further water ingress occurs to the incredible ceiling in the monsoon,” he said.

Though it is not known, who had commissioned this double-domed octagonal tower, a unique construction at that time, was built in the Timurid style of architecture belonging to Central Asia.

The other Timurid style building in Delhi is Sikandar Lodi’s tomb in Lodi Garden.

According to Safvi, Subz Burj at one point of time was perhaps called ‘Sayyadon Ka Maqbara’.

“The Subz Burj is built on the lines of ‘musamman Baghdadi’ or a chamfered octagon. What remains tells us the original tile work must have been exquisite. Basheeruddin Ahmed tells us that it might have been a tomb from Saiyyed dynasty, as it was known as ‘Sayyadon ka Maqbara,” said Safvi.

Ahmed is the author of Waqiat-e Dar-ul-Hukumat Delhi, a book on ancient buildings in Delhi published in 1919.

She added that till 1919, the grave existed in the foyer, which was probably removed when the tomb was converted into a police station by the British.