As part of the newly-introduced court management system, it has been made mandatory for lower court judges to record reasons for the delay in disposal of cases.

NEW DELHI:  At a time when the country is facing a huge pendency of cases, staying of cases is the prime reason for the delay in disposing of cases at district courts across India.

As part of the newly-introduced court management system, it has been made mandatory for lower court judges to record reasons for the delay in disposal of cases and that analysis shows that over 47 per cent of cases remain pending as there is a stay from the higher courts.

Securing the presence of accused persons involved in cases is another major hurdle. If a case is bulky in nature, then also it is one of the reasons why it is not disposed of and few cases are those too whose records are awaited. 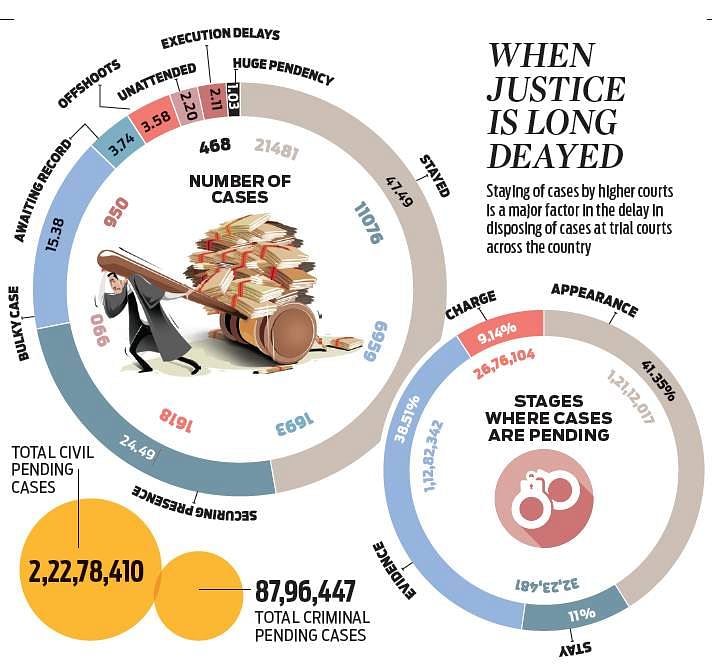 The data has been made available as a result of the implementation of the case management system called CIS 3.0 (Case Information System) which has helped the higher judiciary and the government to monitor performance of each and every judge, the time they spend on each case listed before them every day and the record of their disposal.

Under the District Courts Monitoring System (DCMS) which assesses the performance of each judicial officer, every judge needs to enter the day’s work on the web-based application on a daily basis by 4:45 pm.

The data entered will then be reviewed by the District and Sessions Judge and then the same will be forwarded to the National Judicial Data Grid (NJDG).

The online portal NJDG provides a status report of each court on cases filed, disposed of, under objection and status of those pending for more than two years, five years, 10 years and over 30 years.

Each judge has been allotted a unique ID and under that, they will have to specify the nature of proceedings on a daily basis in the online log sheet, whether he delivered judgment, reserved it or no business took place. Such details specific to a judge would help the higher judiciary in considering promotion and elevation of the lower court judges to the higher judiciary.