According to sources 35 lakh people will visit Sultanpur Lodhi from November 1 to 20 while celebrations are carried out.

CHANDIGARH:  On the 550th birth anniversary of Guru Nanak Dev, eye-catching graffiti art of murals depicting Sikhism and teachings of Guru Nanak are being painted on the walls of the historic city of Sultanpur Lodhi where Guru Nanak attained enlightenment.

The Punjab Government has also declared the rivulet ‘Kali Bein’ as a conservation reserve due to its ecological and spiritual significance. 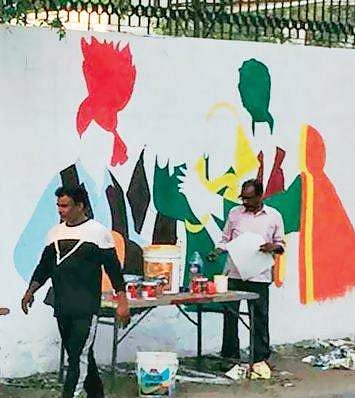 According to sources 35 lakh people will visit this town from November 1 to 20 while celebrations are carried out.

The whole project will be completed before mid-October and the first phase shall begin before monsoon as two types of work mural paintings and stencil art will be on for display.

The first phase is planned for 2.24 kilometres inside the holy city on the walls and entrance gates besides milestones and later at Kapurthala, Lohian Khas and other towns which fall on the way to Sultanpur Lodhi.

Meanwhile the department of forest and wildlife preservation, Punjab has issued a notification declaring a rivulet as ‘Kale Bain Conservation Reserve’.

Now we are on Telegram too. Follow us for updates
TAGS
Guru Nanak Dev Sultanpur Lodhi Kali Bein Punjab