With construction of Ram temple, Ayodhya to get makeover

The construction of the Ram temple in Ayodhya, a seminal event in itself, is expected to kick off a makeover of the temple town.

LUCKNOW: The construction of the Ram temple in Ayodhya, a seminal event in itself, is expected to kick off a makeover of the temple town. From an elevated road and a theme park to a Ramayan circuit and a Ram katha park, the town will get an all-new look The pre and post temple movement Ayodhya has remained backward across economic parameters of development.

The nearest airport in Faizabad was upgraded in 2014, it has no big industry to boast about and no gainful employment, though the literacy rate at 78.15% is higher than Uttar Pradesh’s average of 67.68%. Ayodhya’s largely agrarian support is slackening as productivity has gone down. Good news is the temple town is set to turn the corner. 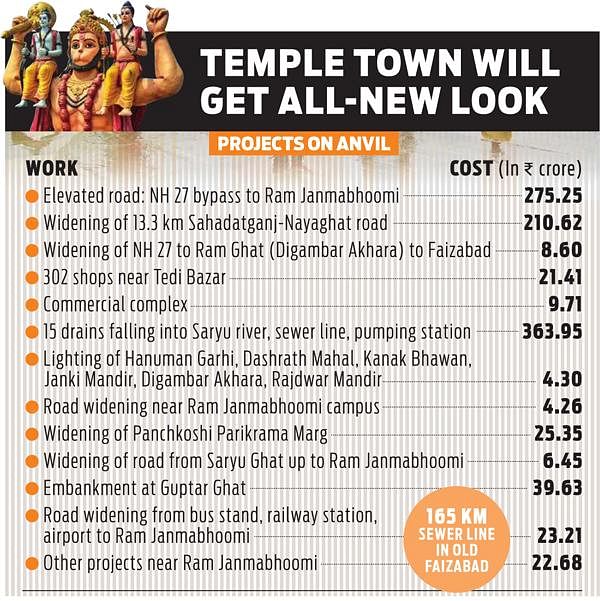 The impending temple construction, to be rolled out by Prime Minister Narendra Modi on August 5, promises to unleash dozens of development schemes for which the blueprint is ready. The foundation for many schemes would be laid the same day. In all, the PM would launch and lay the foundation of development projects worth Rs487.91 crore.

Chief Minister Yogi Adityanath is credited with kicking off much of the work since 2017 when the BJP government took over: Faizabad district was named as Ayodhya and the town was upgraded as a municipal corporation for improving civic standards. The CM has paid at least two dozen visits to Ayodhya since assuming charge.

These resulted in Diwali being celebrated on a grand scale. The government created a Guinness world record last year by illuminating the town with over half a million diyas on the banks of the Saryu.Besides, the infrastructure projects worth Rs350 crore are nearing completion by this year-end. Some of them, delayed due to Covid-19, are: an Rs640-crore international airport, a Lord Ram’s statue and an upscale, ultra-modern township Navya Ayodhya.

The UP government has already released Rs400 crore for the proposed airport. The 1.5-km long and 30-metre wide existing airstrip will be redeveloped to handle bigger aircraft for international operations. It needs to be at least 45-metre wide with a runway of 2.5 km to handle wide-bodied scheduled flights. The project spans 465 acre.

The most exciting will be the proposed tallest statue of Lord Ram – at 221 metres -- 38-m taller than the current tallest Statue of Unity in Gujarat. According to the preliminary design, the 150-meter bronze statue will stand on a 50-meter pedestal, covered under a hood of another 20 metres. It will show Lord Ram holding a bow in his left hand and an arrow in his right. The statue will come up away from the temple.

The government has allocated Rs 200 crore for soil testing, wind tunnel test, design development, and a DPR preparation.  A roadmap for ‘Navya Ayodhya,’ a township spanning nearly 500 acres is ready. The township will come up between Ayodhya and Faizabad. It is estimated to cost Rs1,200 crores. A ‘Katha Kunj’ depicting over 100 instances from the life and times of Lord Ram through statues and idols is on the anvil. Work is already going on in a separate workshop in Ayodhya. Over 125 statues depicting the life of Lord Ram at Guptar Ghat along the Saryu will be shown. 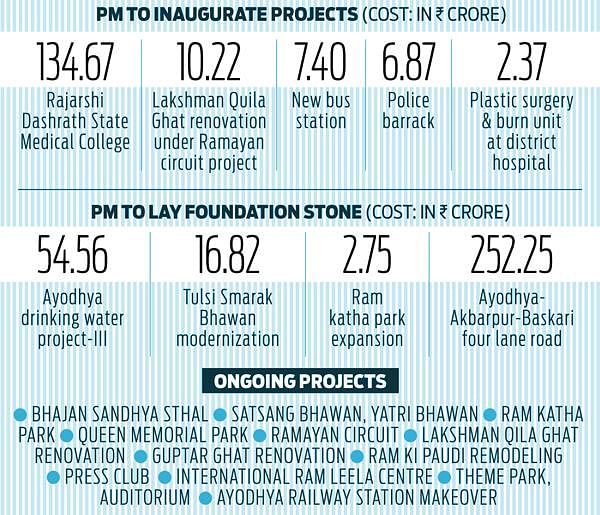