To ease the burden of courts reeling under huge pendency of cases, Chief Justice of India S A Bobde on Saturday stressed for a comprehensive legislation on pre-litigation mediation

NEW DELHI:  To ease the burden of courts reeling under huge pendency of cases, Chief Justice of India S A Bobde on Saturday stressed for a comprehensive legislation on pre-litigation mediation, which is already a trend in developed nations such as the US, Canada, the UK, Australia and Singapore, so that the lengthy litigation would become a thing of the past in India.

In India, the system of pre-litigation hearing is not clearly identified as a separate feature, although both the Civil Procedure Code and Criminal Procedure Code contain certain provisions that can be utilised for this purpose.In pre-litigation hearings, litigants and their lawyers hold a pre-scheduled meeting before the trial begins in the presence of a judge of a judicial authority to identify the actual issues of disputes so that none of the contesting parties can bring in other issues to drag the case by seeking adjournments. 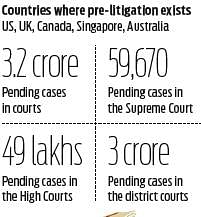 Observing the powers under Section 89 of the Civil Procedure Code (settlement of disputes outside the court) were not fully utilised, Bobde said the Supreme Court, too, tried to settle the Ayodhya dispute through mediation before deciding through a verdict due to lack of consensus among the parties involved in the age-old dispute.

“Mediation is very important to be brought into the judicial system, as it does not affect the earning prospects of the bar with trained lawyers in mediation,” Bobde pointed out while speaking at the third edition of the international conference on Arbitration in the Era of Globalisation. The CJI said a robust “arbitration bar” is critical to the development of institutional arbitration as it would ensure accessibility of practitioners with experience.

“Pre-litigation mediation is the need of the hour to avoid delaying justice and for early disposal of pending cases, which are mounting. I think the time is ripe to devise a comprehensive legislation, which contains compulsory pre- litigation mediation and a remedy for the biggest drawback in a mediation agreement that is to say the unenforceability of an agreement arrived at a mediation would ensure efficiency and also reduce the time pendency for parties as well as the courts,” the CJI said.

Stay up to date on all the latest The Sunday Standard news with The New Indian Express App. Download now
(Get the news that matters from New Indian Express on WhatsApp. Click this link and hit 'Click to Subscribe'. Follow the instructions after that.)
TAGS
S A Bobde