Conventionally, the community in the national capital has always voted for the Congress.

NEW DELHI: The resentment of Muslims against the narrative of Bharatiya Janata Party (BJP) weaved around ‘nationalism’ and ‘Hindutva’ and subsequent provocative statement by its leaders was palpable as the citizenry came out to vote on Saturday. They made it apparent and gave a thumbs down to the contour of the campaign laid out by the saffron outfit.

Majority of Muslim voters seems to have voted for Aam Aadmi Party (AAP), who had shifted to Congress in Lok Sabha polls last year as they believed that the grand old party was ‘capable’ of defeating ‘divisive politics’ at the national level. 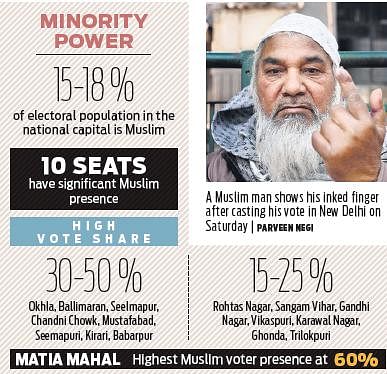 Khawar Ali, a young professional from Okhla, said a few of ‘traditional’ Congress sympathizers were till recently contemplating to make a choice but Citizenship Amendment Act (CAA) cleared all their doubts.  “With the series of protests including the one at Shaheen Bagh against CAA taking center stage in BJP campaign, political mobilisation took place in the community to disapprove the politics of hate. It became easier to pick our candidates. Division of votes would have given advantage to people, who were inciting hatred,” he said.

Consolidation of Muslim votes has also raised the concern of BJP leadership.  Mohammad Burhanuddin, a resident of the Walled City, however, had a different opinion. He said that there was no question of returning to Congress as incumbent government had left no stone unturned to make our life more comfortable. “People who don’t have resources are getting free water and power. We have better schools and health facilities now. What else do we need? I believe that the government has performed and deserves another term,” he said.

Conventionally, the community in the national capital has always voted for the Congress. After 2013 and in subsequent elections, the Congress bastions shifted to AAP. Azhar Khan, who works as an agent for a insurance company, said messages were circulated among community WhatsApp group to vote en bloc to AAP to defeat ‘communal forces’.  “For us, till a couple of weeks ago, the elections were just another opportunity to chose a government. But scenario changed after Shaheen Bagh. It became a fight for our rights and identity,” said Khan, who is the voter of Okhla seat.

Stay up to date on all the latest The Sunday Standard news with The New Indian Express App. Download now
(Get the news that matters from New Indian Express on WhatsApp. Click this link and hit 'Click to Subscribe'. Follow the instructions after that.)
TAGS
muslims BJP congress aap Delhi Assembly Elections