For Satish Sharma, art is all about breaking boundaries or as he puts it, “existing beyond boundaries.”

IT isn’t often that we see three creative people follow similar yet unconventional paths. These are the paths where they tread fearlessly and boldly, skipping tried and tested methodologies and materials en route. Mediums and materials lead artists to change, evolve and undergo transitions – a precursor to creative growth. So it happened with the trio,  Satish Sharma, Anju Kaushik and Rubkirat Vohra, who joined hands to explore a journey with matter and material, with expression and exposition. 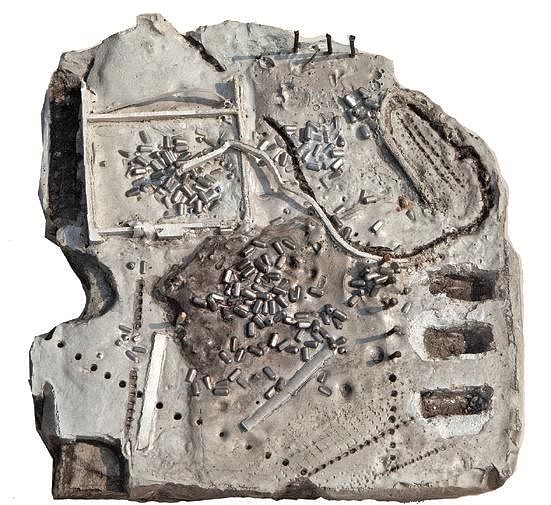 For Satish Sharma, art is all about breaking boundaries or as he puts it, “existing beyond boundaries.” Sharma says he felt it first when he switched from the realistic approach to working on abstracts. “The act of throwing colour on canvas, let it take its own shape and form was liberating. It opened my mind and journey to the unknown and unfamiliar,” explains the artist, who has been painting for over two decades. Sharma’s canvases evoke three-dimensionality and a form that celebrates natural tones like deep madder red, aquamarine of seashore blues, solemn slate greys and blacks of a dark, moonless night. Lately, Sharma has started painting with his hands to create a mixture of expressions that are perhaps less conscious or controlled, and has moved more towards bright monochromatic tones.

On the other hand, Anju Kaushik has completely embraced the third dimension. Her recent works appear more like sculptures, indicating a preference for high relief surfaces. A strong believer in the act of reclamation, Kaushik is into the contemporary act of recycling. She gives a fresh lease of life to rusted, old and discarded objects by embedding them with Plaster of Paris, wood and concrete. The objects challenge the idea of what is rejected, elevating them from what may appear to be part of mundane existence to beautiful pieces of art.

Kaushik gets ideas whenever she chances upon empty bottles, canes, plates, nails, building material and other junk. “I feel there is still some life in them. I then combine new materials, especially waste, in new ways to give these pieces a fresh lease of life and convert them into 3D sculptures,” she says. The alchemist among the three is Rubkirat Vohra, whose abstractions hint at architectural forms and human existence. Yet, they exist in and of their own right – aesthetic objects, disassociated from the world of narrative. Ranging from oils and charcoal on canvas to metallic objects, delicate constructions from wire and linear drawing works evoke her inner metaphysical being. In a way, Vohra peruses a sense of mysticism, where her inner voice experiments with objects of desire.

The artist says she enjoys working with metal and wood to create composite forms. “My works are contemporary, notwithstanding the historical architectural forms that filter into my work in alignment with my being a qualified architect.” Although Vohra conforms to the chatter and silences of her inner being, her art is deeply immersive and lends calm, reaching out to the viewer like an extension of the artist’s state of mind.