Shutters for survival: Atul Dodiya’s bringing viewers face-to-face with realities of our times

'More than making a clear-cut statement about being in the masters’ shade, through the show, I am trying to understand and learn from them.' says Atul Dodiya.

Atul Dodiya’s recently concluded exhibition in Delhi, titled Stammer in the Shade, was a curious exploration of history of Indian and Western art. The show, at Vadehra Art Gallery, introduced the viewer to Modern masters such as Vincent van Gogh, Pablo Picasso, Pierre- Auguste Renoir, among others.

The works also reflect the artist’s influences of Benode Behari Mukherjee, Rabindranath Tagore and so on, and his constant leitmotif of shop shutters.

In a previous interview, you talked about self-doubts as an essential element for an artist. Does this exhibition elaborate on this idea? There are doubts which are essential for a creative process. I value such thoughts rather than a total confidence from the very start of any artistic endeavour. 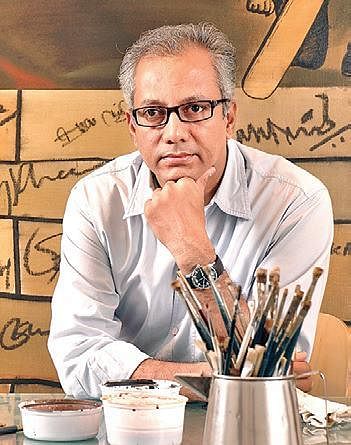 Did you choose the title, Stammer in the Shade, because of these thoughts?

More than making a clear-cut statement about being in the masters’ shade, through the show, I am trying to understand and learn from them.

Also, I felt the phrase is poetic and beautiful. There is no direct reference to the hesitation but I just wanted to emphasise on the hesitation aspect of the creative process.

In the show, your painted shutters are juxtaposed with a photograph of a painting by the Masters, and you refer to this entire setup as a shrine. Why? These shutters, almost eight feet high, are shrines for me because of the pictures of the paintings by Masters.


These reflect the same meaning for me as a Ganesha tile, commonly placed at the entrance of a house.

Or in the same vein, an idol of a God placed above the main door. In my studio, there’s a library, and above the cabinets I’ve placed many great paintings by artists and photographs of legends who have influenced me all my life. Painting on the shutters was not an easy task because of its uneven surface, but I wanted to push the boundaries of paintings, which opposed to the common perception is not dead.

When did you first use shutters in a show? It was in 2001 for an exhibition by Tate Modern called Century City, where nine cities were chosen, taking stock of what happened in that particular decade. Since this opened in 2001, curators were mainly talking about violence happened in the previous decade. There was Babri Masjid demolition in 1992, Mumbai Blasts in 1993 and a few other incidences. Shutters seemed fit at that time because in the urban landscape, shops are one of the main elements that get affected [during violence]. When mob violence takes over, shutters go down, leaving a sense of insecurity in a city.

Did that show remind you of the ongoing violence in Delhi? It is so unfortunate that due to mob violence, people have lost their business overnight. It is distressing to note that many shops were burned down in the North-East area of Delhi. These riots mostly affect poor people, and let’s accept we are people of a poor country. It doesn’t matter whether they are Hindu or Muslim.

A person would start their business every day with so much hope, with daily grind of survival. When this kind of thing happens, it is very painful. I visited Shaheen Bagh. I feel government should rationally discuss CAA with the protestors. People have a right to have an opinion, but listening on both sides is mandatory.

Now we are on Telegram too. Follow us for updates
TAGS
Atul Dodiya Vadehra Art Gallery