Justice Ramana, who is next in line to become the Chief Justice of India, added that social media is to blame for the sudden spike in attacks against judges.

As judges are self-restrained from speaking out in their own defence, they are now being construed as soft targets for criticism,” said Justice Ramana, who is next in line to become the Chief Justice of India April 2021 after incumbent SA Bobde retires. He added the proliferation of social media is to blame for the sudden spike in attacks against judges. 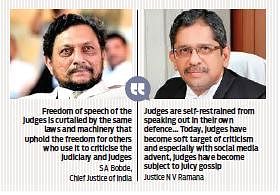 Concurring with Justice Ramana, CJI Bobde said the freedom of speech of judges “is curtailed by the same laws which prevent people from saying whatever they feel like, adverse to the independence of the judiciary”.

They were speaking at the launch of a book authored by former SC judge Justice R Banumathi. CJI Bobde stressed the importance of an independent judiciary is not just limited to independence from executive powers, but from other pressures and prejudices as well.

“The judicial independence is not for the personal benefit of the judges, but for the nature of power vested with the judiciary.”

Justice Ramana said there seems to be a misconception that judges lead a luxurious life. “From my own experience, I can state that the life of a judge is not a bed of roses,” he said, adding that the reality was quite different from what people comprehend.

“Best judges of the same are the family members, who are usually torn between restraints and relationships.”

He pointed to the self-imposed restrictions judges follow in social life to remain independent. “I believe judgeship in the present day requires sacrifices unparalleled in any other profession, and the same is required to be made as the country’s future is dependent on strong independent judges.”

For judges, the CJI said, the biggest challenge is to ensure the “country inches towards the goals set in the Constitution”. To achieve the same, he asserted, an independent judiciary is essential.

Now we are on Telegram too. Follow us for updates
TAGS
Supreme Court NV Ramana SA Bobde CJI Chief Justice of India