India and Bangladesh have seen a spurt in bilateral engagement of late with gifts being exchanged across the border and also a series of meetings between top leaders of the two countries.

NEW DELHI: India and Bangladesh have seen a spurt in bilateral engagement of late with gifts being exchanged across the border and also a series of meetings between top leaders of the two countries.
The spurt is being viewed by analysts as a way to reduce the friction seen in the ties due to India’s non-fulfilment of vaccine commitments. New Delhi has so far supplied around 103 lakh doses of Indian-made AstraZeneca vaccines—commercially and as a grant. However, as the second wave of the pandemic came, India forced the Serum Institute of India (SII), the manufacturer of vaccines in India, to defer orders.

“The recent engagements are another sign that India’s engagement with Bangladesh has been one of its best in its neighbourhood. There is an all-round engagement, which is helping both countries. There has however been disappointment over vaccine supply. But, I don’t think there would be any major impact on ties as Bangladesh has managed to get vaccines from other sources. But they would love to get Indian vaccines. The government will soon have to allow some shipments of vaccines to Dhaka. We have given them vaccines when possible,” former Indian High Commissioner to Bangladesh Pinak Ranjan Chakravarty said.The two countries recently exchanged locally produced mangoes. 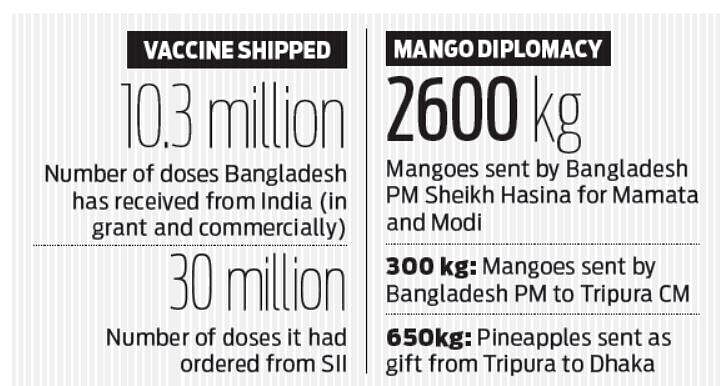 External Affairs Minister S Jaishankar’s meeting with his Bangladeshi counterpart AK Abdul Momen, Prime Minister Narendra Modi’s visit to Dhaka for attending the centenary birth celebrations of Sheikh Mujibur Rahman and Foreign Secretary Harsh Vardhan Shringla’s visit to Dhaka, the first by a foreign official after the start of the coronavirus pandemic, are all signs of the importance that India attaches to ties with Bangladesh.

Chakravarty’s views were echoed by Ayanangsha Maitra, a research scholar at the Bangladesh-based Centre for Governance Studies, Ayanangsha Maitra. “Vaccine is the main issue. Around 15 lakh Bangladeshis have taken Indian-made vaccines. They are waiting for their second dose. Our commercial engagement is yet to be fulfilled. This hits our credibility. China has sent their vaccines, so has the US. India needs to send their vaccines quickly,” he said.

When asked about Dhaka’s growing ties with Beijing, the former envoy said Bangladesh wants to remain neutral and enjoy good relations with both. “They are also careful not to get into debt traps of China like Sri Lanka. A few railway projects too have been taken away from China and India is now executing them.
The analysts also dismissed rumours that Bangladeshis are unhappy about the prospect of the Teesta river water issue not being solved as Mamata Banerjee has maintained her grip on power. While Chakravarty said that there is hope for a resolution of the Teesta River issue as there’s an interim deal, Maitra was of the opinion that the issue is far from solved.

Now we are on Telegram too. Follow us for updates
TAGS
India Bangladesh relations Coronavirus COVID S Jaishankar Abdul Momen