Cafe Delhi Heights: It's all in the family!

It always began with a whisper at the wedding banquet table. “Batra catering se hai” would remark some know-it-all and that’s when the food part of matrimonial celebrations would begin and people would line up. Circa June 2021: if you have a wedding banquet line you should be arrested, and Batra Catering has been shut for the last five years.

2021 also marks 10 years since the first Cafe Delhi Heights (CDH) opened. People familiar with TNIE, and indeed many other city publications, will know that this saga, now stretching to more than a score of outlets, began with a restaurant in Cross Point Mall in 2011. Vikrant and Sharad Batra started something special there.

“Shammi (Vikrant)” notes Sharad, “...has always been the ideas guy. While I figure out when and where we can make it real.” The brothers, despite their impeccably culinary pedigree, were venturing into a hitherto unknown business: that of direct F&B outlets. 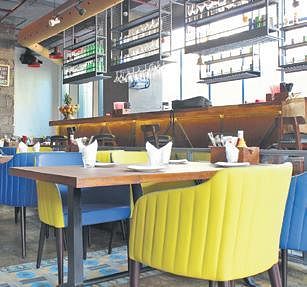 “Given our background, Sharad and I had a very specific vision of what we wanted: something a lot more organised, and in a retail setting. As we were both well-travelled and had seen things/concepts around the world, we realised there is a thing/concept, called café in the Delhi market, and in India,” reminisces Vikrant. “Earlier a café in Delhi meant a Café Coffee Day or whatever... something coffee-based. Starbucks had not come to India back then, but there was no association of a café with a casual space to come and eat good food,” notes Vikrant.

Both the brothers were very aware of the market and Sharad (“one of his strongest points, he finds the best place with the best deal”, mentions Vikrant) found a space in what was then known as the “Khan Market of Gurgaon”.

Then the chaos that Vikrant loves ensued, much like the city the brand is named after. Delhi is a chaotic city of millions with winding streets and vicarious hopefuls, with no cuisine to call its own, like London or Istanbul. There is so much food in the city of Delhi, and somehow, Vikrant was able to capture it in a space Sharad found.

And that is when the first Cafe Delhi Heights opened. The rest as they say is history, but let’s get back to the present. If you have ever eaten at a Cafe Delhi Heights, it takes ages to place an order, because there is something for every taste. But then Delhi does that anyway. With 25 outlets of Cafe Delhi Heights already existing pan-India, the brand is also expanding further more with the opening of five outlets lined up within next two years. And while the brothers may not have travelled a lot in the recent past, they remember. They have also expanded business.

According to the brothers, they often “take two steps back so we can take five steps forward.” Food has always been the forte and the most key feature of Cafe Dehi Heights. “We believe in not only understanding the palate of the audience but also innovating and experimenting with it in the most comfortable manner,” says Vikrant, while noting, “It’s not only the food but it’s the complete experience which we offer to our customers which includes the live gigs (prior to and after the pandemic), best cocktails, warm interiors, value for money, etc., that makes them a CDH lover.”

So what are you in the mood  for today?

Now we are on Telegram too. Follow us for updates
TAGS
Cafe Delhi Heights family business Sharad Batra Vikrant Batra