How many RTs to win free Wendy's chicken nuggets? 16-year-old gets 2.5 million retweets in just a week

Will Carter Wilkerson from Nevada get his free nuggets from Wendys?

A 16-year old kid who had a simple dream of gobbling up free chicken nuggets all day and all night hit upon an idea to fulfill his culinary wish. Carter Wilkerson from Nevada, US has ever tweeted to Wendy's, an American international fast food chain, one fine day asking, "Yo @Wendys, how many for RTs for a year of free chicken nuggets?"

To everyone's and Carter's own surprise, Wendys replied to his tweet with an unimaginable figure - 18 million RTs.

HELP ME PLEASE. A MAN NEEDS HIS NUGGS pic.twitter.com/4SrfHmEMo3

The highest RTs anyone has ever got on Twitter, so far, has been Ellen DeGeneres‏'s Oscar image from 2014.

If only Bradley's arm was longer. Best photo ever. #oscars pic.twitter.com/C9U5NOtGap

Undaunted, and seeing heaps of golden nuggets at the culmination of his feat, Carter took up the challenge. It's been exactly a week since he started out on his mission to get 18 million RTs, and he has already amassed 2.7 million so far. The teen has even launched a website called 'Nuggets for Carter' where he began merchandising stuff. Smart as he seems to be, Carter should have probably asked for free nuggets for life.

Not long before, a lot of other people started demanding free chicken nuggets from Wendys and set out on the very same mission.

Interestingly, the person handling the Wendys official twitter page has also been in the limelight for his/her/their witty responses. Usually, business pages on social media don't engage directly with the audience and if they do, it's usually pre-screened formal responses. But Wendy's has been going all out, making people laugh and gaining some brownie points with its customers around the free chicken nuggets buzz.

Here are some of the responses Wendys has been giving- 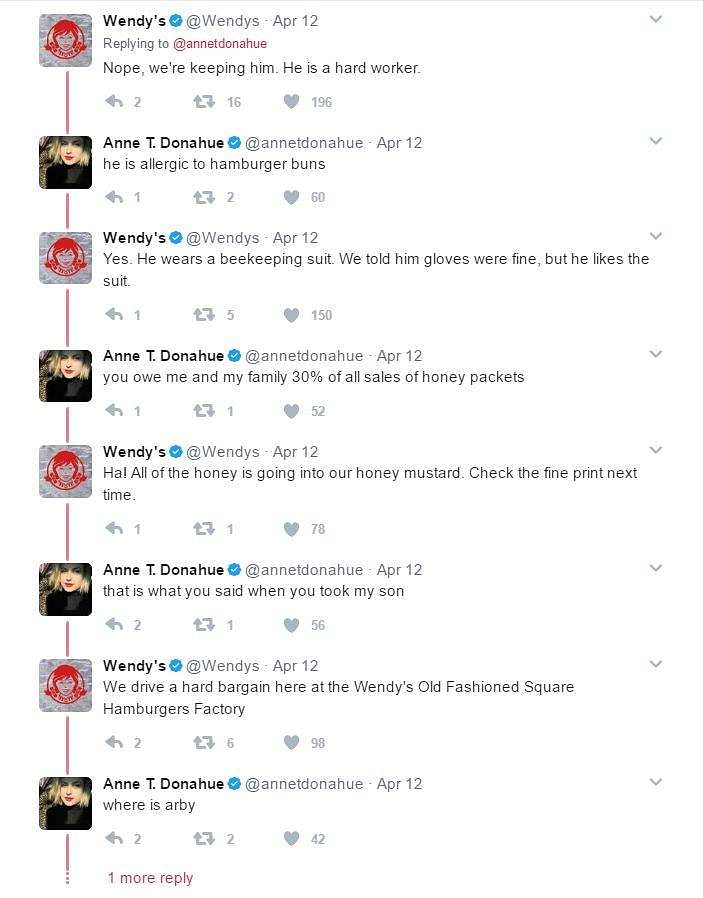 In fact, a report in The Verge, an online news portal, already did the math. Should Carter win, Wendy's could fulfill its debt with, say, a bare minimum of a four-piece nugget order per day, which in Carter’s hometown of Reno, Nevada, comes out to $395 per year (including tax, but not including the costs associated with ketchup packets). That works out to 12,328.76 retweets for each of the 1,460 nuggets Carter would enjoy.

If Carter does win, this could well become a new internet fad - demands in exchange for retweets.

Now we are on Telegram too. Follow us for updates
TAGS
Twitter free chicken nuggets wendys retweets Carter Wilkerson