The 42-year-old Kremlin opponent announced the hunger strike in May, demanding the release of all Ukrainian political prisoners being held in Russia.

MOSCOW: Ukrainian filmmaker Oleg Sentsov on Tuesday entered day 100 of his hunger strike, as he languishes in a Russian Arctic prison on terror charges with little hope of release.

The 42-year-old Kremlin opponent announced the hunger strike in May, demanding the release of all Ukrainian political prisoners being held in Russia.

But Russian authorities are reluctant to free him or his countrymen, despite a dramatic decline in his health and pressure from the West.

Sentsov's cousin told AFP in an interview last week that Sentsov was "losing hope" and had said in a recent letter he felt the "end is near".

"In his letter, he wrote to me that we mustn't tell him any more that freedom is coming. He doesn't believe it any more," Natalia Kaplan said.

"He has a very weak heartbeat of 40 beats per minute. He complains that his heart hurts, that he's weak, and he tries not to get up too often to preserve his strength," she said.

Kaplan was among several dozen people demonstrating in front of the Russian embassy in Kiev Tuesday in support of Sentsov.

"Oleg is hanging in there... he is not broken," she told protestors, some of whom were carrying signs that read "Free Sentsov" and "Stop Putin".

"We call on our partners and international organisations to increase pressure on Russia to #SaveOlegSentsov and free Ukrainian political prisoners in Russia," she wrote on Twitter.

The father of two is receiving supplements in a drip usually meant for people unable to eat.

Sentsov was convicted of planning arson attacks on pro-Moscow party offices in Crimea after Russia annexed the peninsula from Ukraine in 2014. 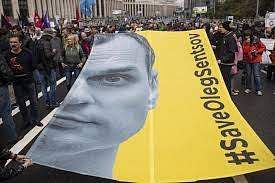 He had also taken part in the Maidan protests in Kiev during the winter of 2013-2014 that culminated in Moscow-backed president Viktor Yanukovych fleeing the country.

Sentsov was sentenced to 20 years imprisonment for terrorism and arms trafficking after a trial denounced as "Stalinist" by Amnesty International and criticised by Kiev, the EU and the US.

Journalist and activist Zoya Svetova said Sentsov had no plans to end his hunger strike, after she visited him in his strict-regime penal colony in the Russian north last week.

Svetova said the prisoner told her he had lost 17 kilograms (38 pounds) as a result of the protest, while prison medics said he had lost 11.

Sentsov was working on his second film when he was arrested. His first film "Gamer" is about a young video game player, and was shown at the Rotterdam Film Festival in 2012 as well as several other European festivals.

G7 ambassadors as well as major figures from the world of cinema, from director Jean-Luc Godard to Hollywood star Johnny Depp, have called for Sentsov's release.

Putin and Ukrainian President Petro Poroshenko discussed a possible prisoner exchange during a phone conversation this summer, but no concrete agreements have been reached.

The Kremlin has so far remained unresponsive to requests for his release, saying that a request for a pardon can only be filed by the prisoner himself, which Sentsov has refused to do.

Russian prison authorities said this month that members of a public monitoring commission had visited the filmmaker, who "had not complained about anything" during their conversation.

In a rare public intervention on the subject in early June, Putin showed little sympathy towards Sentsov's plight.

Sentsov was arrested because "he was planning a terrorist attack" rather than because of opposition or artistic activities, the Russian president said.