The critical question is whether US and China can strike a deal by the March 1 deadline because if they succeed, a cloud will be lifted off the world economy.

While 2018 was the year trade wars broke out, 2019 will be the year the global economy feels the pain.

Bloomberg’s Global Trade Tracker is softening amid a fading rush to front-load export orders ahead of threatened tariffs. And volumes are tipped to slow further even as the U.S. and China seek to resolve their trade spat, with companies warning of ongoing disruption.

Already there are casualties. GoPro Inc. will move most of its U.S.-bound camera production out of China by next summer, becoming one of the first brand-name electronics makers to take such action, while FedEx Corp. recently slashed its profit forecast and pared international air-freight capacity.

“Any kind of interference with commerce is going to be a tax on the economy,” said Hamid Moghadam, chief executive officer of San Francisco-based Prologis Inc., which owns almost 4,000 logistics facilities globally. “And the world economy is probably going to slow down as a result of it.”

Financial markets have already taken a hit. Bank of America Merrill Lynch estimates that the trade war news has accounted for a net drop of 6 percent in the S&P 500 this year. China’s stock market has lost $2 trillion in value in 2018 and is languishing in a bear market.

Recent data underscore concerns that trade will be a drag on American growth next year. U.S. consumers are feeling the least optimistic about the future economy in a year, while small business optimism about economic improvement fell to a two-year low and companies expect smaller profit gains in 2019. 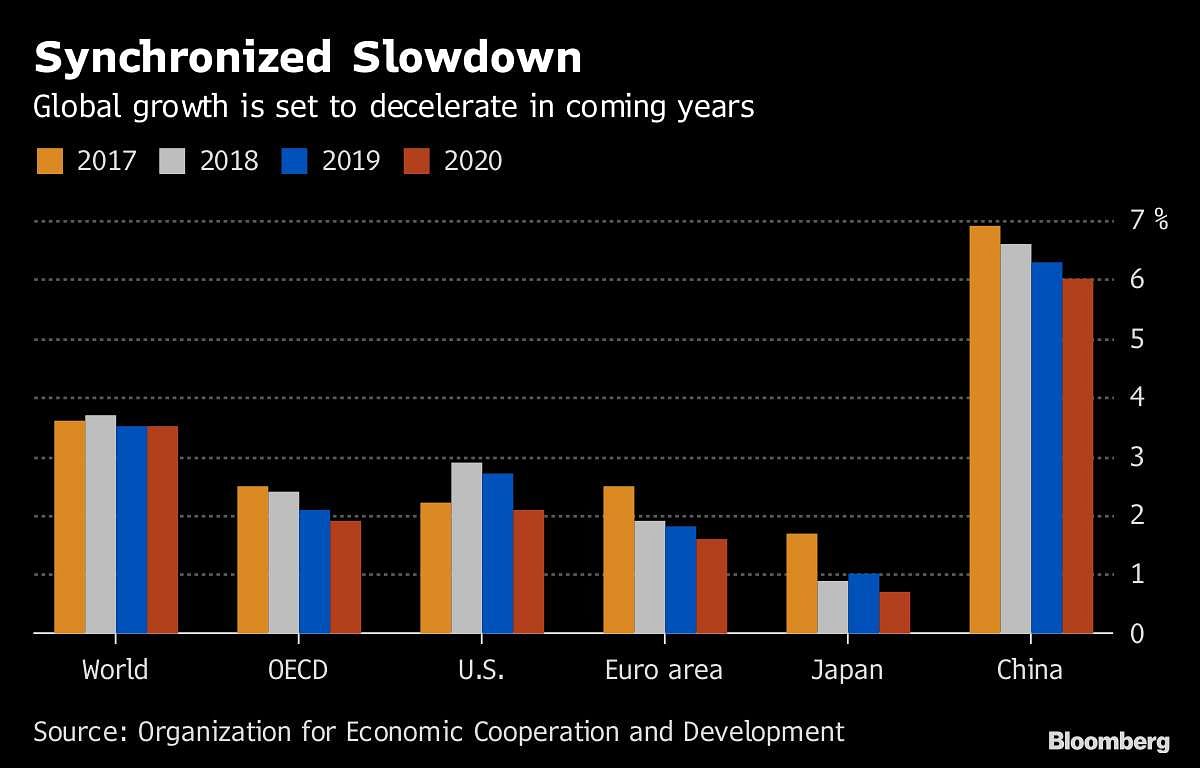 The International Monetary Fund forecasts trade volumes will slow to 4 percent in 2019 from 4.2 percent this year and 5.2 percent in 2017. They warn that trade barriers have become more pronounced.

Europe isn’t insulated either. While Germany’s key machinery sector will produce a record 228 billion euros ($260 billion) this year, the trade disputes are among reasons why growth will slow, according to the VDMA industry association. Output will increase about 5 percent in real terms in 2018, the most since 2011, before growth slows to 2 percent next year.

Then there’s the risk of the U.S. placing tariffs on auto imports from Europe and Japan, a move that would damage relations between some of the world’s biggest economies. The arrest of Huawei Technologies Co. Chief Financial Officer Meng Wanzhou illustrates the risk of unexpected developments that can quickly inflame already tense relations.

"‘Trade divergence’ since 2018 and the ‘Tariffs-Limbo’ into 2019 are likely to keep a high degree of uncertainty and continue to have an impact on trade and investment plans," New York-based Citigroup global markets economist Cesar Rojas wrote in a recent note.

The critical question is whether Washington and Beijing can strike a deal by the March 1 deadline. If they succeed, a cloud will be lifted off the world economy. But for now, the threat that tensions will linger is a brake on business expansion plans, and thereby the global economy.

Dippin’ Dots LLC is among those caught in the crossfire. The U.S.-based maker of ice cream and other frozen products spent three years breaking into the Chinese market and opened its first stores in the country this year, only to pay double-digit tariffs on imported dairy products. CEO Scott Fischer said if the U.S.-China talks fail and additional tariffs are added, he’d be forced to rethink strategy, supply chains, and where in the world he expands.

“From an entrepreneur’s perspective, our question is how long will this continue?" Fischer said. “It’s hard to plan business in this environment."

What Our Economists Say...
For the world economy, the threat of trade war has dissipated, not disappeared. Three risks stand out. First, 90 days of talks between China and the U.S. might end in failure, with higher tariffs following. Second, even without an increase in tariffs, front-loading of exports in 2018 will reduce shipments in 2019. Finally, looking beyond the trade war, early warning signs from PMI surveys to FedEx profit warnings flag a softening of demand.