Trump has tweeted 'The United States has foolishly given Pakistan more than 33 billion dollars in aid over the last 15 years, and they have given us nothing but lies and deceit'.

In his tweet on Monday, President Trump said, “The United States has foolishly given Pakistan more than 33 billion dollars in aid over the last 15 years, and they have given us nothing but lies and deceit, thinking of our leaders as fools. They gave safe haven to the terrorists we hunt in Afghanistan, with little help. No more!”

Reacting to this statement, Abdul Nawaz Bugti, representative of Baloch Republican Party to the United Nations Human Rights Council (UNHRC), said, “The Baloch people see this statement of President Trump as a very positive development and hope it’s not a pressure building measure against Pakistan, but a true realisation of the fact that all the aid that the U.S. has been giving to Pakistan is actually being used to support the terrorism”.

“In order to defeat terrorism, the U.S. and the western world have to defeat the forces, which have been supporting terrorism in the region. In our region, it is Pakistan military, who have been supporting and exporting terrorism not only to neighbouring countries, but also the western world to counter the struggle of Baloch people and other minorities within Pakistan, who have been trying to get their basic human rights,” he added.

“Pakistan has used the U.S. weapons to kill the nations under its illegal occupation and religious minorities and has also allowed the Chinese to reverse engineer the U.S. products, in short, in return for the generous wholehearted support and trust of the U.S., Pakistan has stolen funds, technology and weapons,” she added. 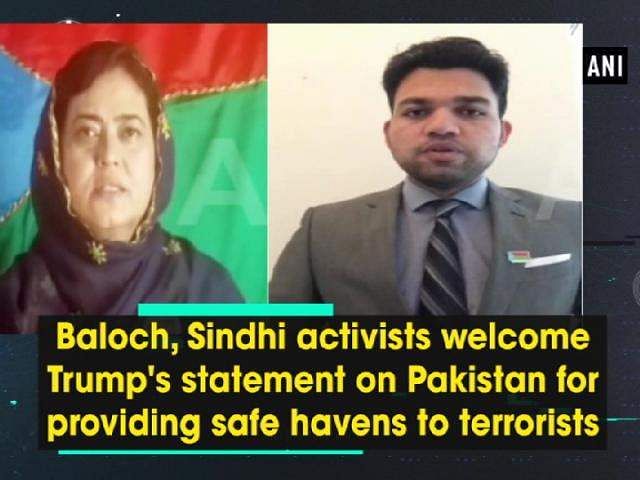 Hammal Haider Baloch, leader of Baloch National Movement, said “The BNM welcomes President Trump’s commitment to end his support to Pakistan. It’s really great to know that Americans are finally realising Pakistan has always played a dubious role in the war against terrorism”.

“Although, the Baloch people were always telling that Pakistan is actually the largest terrorist manufacturing outfit in the world, it has always undermined the stability of Afghanistan and stopped the peace and development of that particular region. The aid, which Pakistan has received in the name of war against the terrorism, was never used for it, but instead used to support, promote and export terrorism all over the world,” he added.

“It’s the time to hold Pakistan accountable for what it has done against humanity”, Haider further said.

Shafi Muhammad Burfat, Chairman of Jeay Sindh Muttahida Mahaz (JSMM), said, “We are happy that the democratic countries have realised that Pakistan is nothing but a fraudulent state. Pakistan is a failed state, which has been exposed as a terror-promoting state. Trump has revealed in his tweet that the U.S. has paid USD 33 billion dollars in the past 15 years to wipe out terrorism. On one hand, Pakistan used to take aid from the U.S. and on the other hand, it has provided shelter to Haqqani Network, Osama bin Laden, Jaish-e-Mohammd and Jamaat-ud-Dawah’s founder Hafiz Saeed”.

“We are happy that Pakistan has been exposed as a failed and terror state, which promotes terrorism all over the world", he added.

Now we are on Telegram too. Follow us for updates
TAGS
pakistan Afghanistan Baloch United States President Donald Trump Sindhi