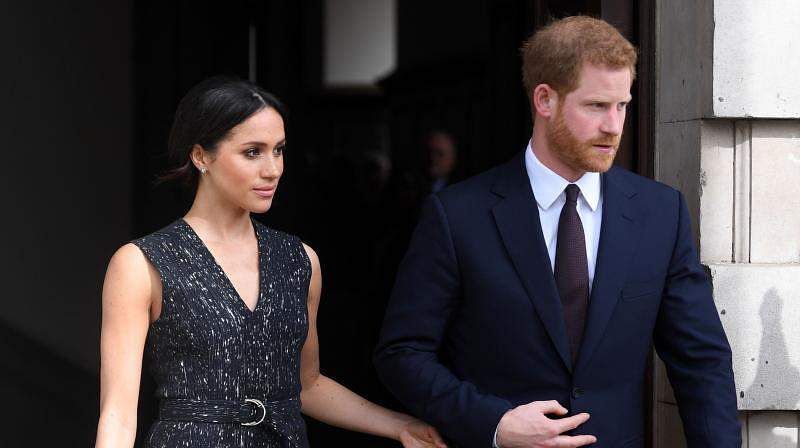 WINDSOR: Meghan Markle and her mother Doria Ragland arrived at the exclusive Cliveden House Hotel Friday evening (British time) where they will spend the night before the royal wedding. The wedding ceremony will take place Saturday, May 19 between 12 to 2 pm in British time (IST: 4:30 pm).

Both looked happy and relaxed after Ragland's first meeting with Queen Elizabeth II and her husband, Prince Philip, at Windsor Castle. She has now met most of the senior British royals since her arrival from California on Wednesday.

Ragland will ride to St. George's Chapel on the ground of Windsor Castle with Markle on Saturday morning for the ceremony that will officially bring her daughter into the royal family.

Tens of millions of TV viewers around the world, as well as 600 invited guests, are expected to watch at least part of her wedding to Prince Harry.

Meanwhile, Prince Harry visited delighted crowds of well-wishers outside Windsor Castle Friday evening on the eve of his wedding to Meghan Markle, accompanied by his brother and best man Prince William.

The brothers, wearing jackets and open necked shirts, walked along a line of flag-waving spectators, shaking hands and chatting -- causing huge excitement among the crowd.

Thank you to the crowds in Windsor for the amazing reception for Prince Harry and his best man The Duke of Cambridge! #RoyalWedding pic.twitter.com/XUmx7XbrFX

William conducted a similar impromptu walkabout on The Mall on the night before his 2011 wedding to Kate, accompanied again by his brother.

Harry was William's best man back then, and he has repaid the compliment by asking his older sibling to be his best man at Saturday's ceremony at St George's Chapel.

A smiling Harry gave a thumb's up and answered "Great, thank you" when asked how he was feeling. He also accepted a teddy bear from one well-wisher as he talked with people from Britain, the United States, Canada and elsewhere.

On the other side, final preparations were being made inside the walls of Windsor Castle hours ahead of Saturday's royal wedding. Florists were busy adding finishing touches to the floral decorations at St. George's Chapel.

As preparations for the Wedding of Prince Harry and Ms. Meghan Markle continue in Windsor, join us for a look at the route the newlyweds will take in a Carriage Procession following the Wedding Ceremony.#RoyalWedding pic.twitter.com/YnFQVhxxti

A team of five workers was adding boughs of green foliage and white flowers to a voluminous display surrounding the South Door of the chapel. The entrance will be used by guests arriving ahead of the noon ceremony.

The wide open courtyard outside the chapel, known as the Lower Ward, was a hive of activity. Amid the bustle of castle workers, soldiers were carrying kit bags through the Henry VIII Gate into the castle grounds.

Some children of residents of the castle were playing on the clipped lawns, which were bathed in the evening sunshine, as their parents smiled.

Archbishop of Canterbury Justin Welby said it's "wonderful" that Prince Charles will walk Meghan Markle down the aisle at her wedding to Prince Harry.

The heir to the throne stepped in after Markle's father was unable to fly to Britain for the ceremony because of poor health.

With my brother @PB_Curry in Windsor getting ready for the #RoyalWedding tomorrow! We are praying God’s blessing on the couple and all involved. pic.twitter.com/j48oHn5LmN

Welby, who will marry Harry and Markle at Windsor Castle on Saturday, says Charles is "a very warm person and that he's doing this is a sign of his love and concern and support. And I think it's wonderful. It's beautiful."

Royal wedding fans camped outside Windsor Castle have expressed happy surprise that Prince Charles plans to walk Meghan Markle down the aisle during her marriage to Prince Harry.

The fans decked out in the national colors of Britain and the United States had expected Markle's mother, Doria Ragland, to do it.

Roseline Morris, a 35-year-old from Basildon, points out that Charles doesn't have a daughter. "So he's never going to get the chance to walk a daughter down the aisle, so this will be nice for him as well." she says. "I imagine he'll be feeling very proud."

She adds that "I fully approve since Charles is going to be her father-in-law."

The French may have overthrown their own monarchy more than two hundred years ago but for some there remains a fascination for the trappings of the royal experience.

French admirers of the British royal family were getting ready Friday for the wedding, with shops selling merchandise seeing brisk sales in recent days.

The Franco-British owner of the "British Shop" in Paris' posh 16th district, Chantal Laserre, said customers have been rushing in to get souvenirs to mark the event. Laserre says "there's an interest for this wedding because she is Catholic and she is divorced and she is American. It's a big change in the royal family."

Fresh out of Harry-and-Meghan dish towels, she was frustrated that she didn't order more in advance.

All French news channels and other major television channels TF1, France 2, M6 will broadcast the wedding ceremony live on Saturday.

British police are manning barricades and patrolling the grounds around Windsor Castle as authorities take on the massive security operation for the wedding.

The barricades are in place to deter attackers using vehicles, such as the one on Westminster Bridge in London last year. Sniffer dogs and mounted patrols are also out and about.

The Thames Valley Police say guests and spectators will be subject to airport-style security scanners and bag searches.

Royal fans are also being asked not to throw confetti, particularly during the procession, for police say "it poses a potential security risk and it's a bit of a pain to clean up!"

Tens of thousands of spectators are expected in the town west of London for the newlyweds' carriage ride route after their wedding Saturday.

WATCH | The wedding cake being prepared

Buckingham Palace says the Duke of Edinburgh will attend the royal wedding — just a few weeks after undergoing a hip replacement operation.

The palace confirmed Friday that Prince Philip would attend the wedding Saturday between American actress Meghan Markle and Prince Harry.

The 96-year-old Philip has largely retired from public duties and it had not been clear whether he would be feeling well enough to attend.

Queen Elizabeth II's husband made his first public appearance since the April 13 surgery at the Royal Windsor Horse Show earlier this month.

(With inputs from AFP and online desk)

Covid -19 still a global health emergency, but in transition point: WHO

Adani vs Hindenburg: The story of Asia's richest man and why is his company tanking

Sabalenka closes in on Swiatek in WTA rankings

Budget should focus on falling imports, impact of slowdown: Chidambaram

Seeking an ally in India for the transformation of the UN process, says UNGA President