The moments of his "interrogation, torture and killing were audio recorded and sent to both his phone and to iCloud", CNN quoted the privately-owned Sabah daily as saying.

ANKARA: Missing Saudi Arabian journalist Jamal Khashoggi may have recorded his own death as he turned on the recording function of his Apple Watch before walking into the Saudi consulate in Istanbul on October 2, a Turkish daily reported on Saturday.

The moments of his "interrogation, torture and killing were audio recorded and sent to both his phone and to iCloud", CNN quoted the privately-owned Sabah daily as saying.

It said conversations of the men involved in the reported assassination were recorded.

Security forces leading the investigation found the audio file inside the phone Khasshoggi left with his fiancee, Hatice Cengiz, according to the daily.

Upon noticing the watch, Khashoggi's assailants tried to unlock the Apple Watch with multiple password attempts, ultimately using the journalist's fingerprint to unlock the smart watch.

They were successful in deleting only some of the files, Sabah reported.

However, on its website, Apple does not list fingerprint verification as one of the Apple Watch's capabilities.

A representative from the company confirmed to CNN the watches do not have the feature.

It was not immediately clear whether it would have been technically feasible for Khashoggi's Apple phone to transfer audio to his phone, which he had given to his fiancee before entering the consulate.

Saudi and Turkish officials have not yet commented on the Sabah report.

Saudi Arabia firmly denies any involvement in his disappearance and says he left the consulate that afternoon. 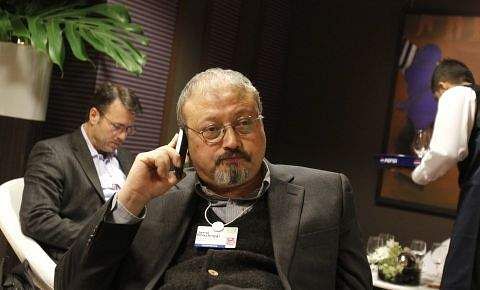 Cengiz, who was waiting outside the consulate, says she did not see him re-emerge.

Turkey has called on Saudi officials to provide evidence that he left the consulate, as they claim, CNN reported.

Saudi Arabia Interior Minister Prince Abdulaziz bin Saud bin Naif bin Abdulaziz said reports that the Saudi government ordered the killing of Khashoggi were "lies and baseless allegations against the government of the Kingdom", according to a statement in the state-run Saudi Press Agency (SPA) published on Saturday morning.

On Friday, a source familiar with the ongoing investigation told CNN that Turkish authorities have audio and visual evidence that showed Khashoggi was killed inside the Saudi consulate.

The evidence, which was described to the source by a Western intelligence agency, showed there had been an assault and a struggle inside the consulate. There is also evidence of the moment that Khashoggi was killed, the source said.

Turkish security units analysed how Khashoggi's reported killing unfolded with the use of a translator, according to Sabah.

Sabah also reported that investigation units were currently examining all cell phone and landline records from the consulate and the consul general's residence on October 2.

Khashoggi, a columnist for The Washington Post, went into the consulate to obtain paperwork that would allow him to marry his Turkish fiancee. He hasn't been seen in public since.

Now we are on Telegram too. Follow us for updates
TAGS
Jamal Khashoggi Saudi Arabia Saudi consulate