Waheeda Reese and her 14-year-old daughter, Anissa, were inside watching news reports about drowned towns all over the state and rain that hadn't yet stopped.

FAYETTEVILLE: The river seethed a quarter-mile away, bulging from its banks, so the patrol cars circled the neighborhood three times.

"Get out now," a voice boomed from a bullhorn. "This is an emergency."

Waheeda Reese and her 14-year-old daughter, Anissa, were inside watching news reports about drowned towns all over the state and rain that hadn't yet stopped.

"All that water is going to come this way," Anissa said, trying to convince her mother it was time to leave. The city had taped a mandatory evacuation notice to their front door, and a friend in the fire department had called to warn: "I don't want to have to come pick you up in a boat." 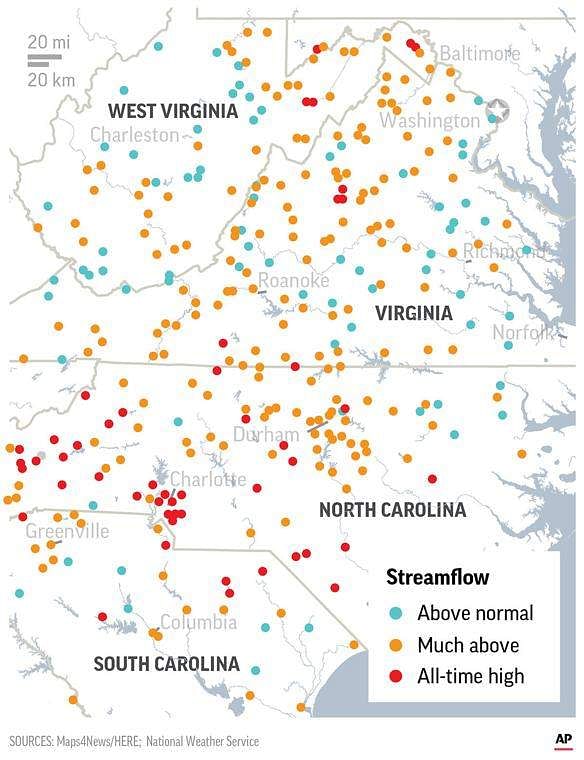 They still had 22 hours until a deadline to go, and Waheeda wanted to stay. She pointed out the window and said, wishfully, "Look, I think the rain's letting up."

As the days drag on, Hurricane Florence has taken this deceptive turn: The violent winds that rattled shingles off houses and tore down trees have subsided, and the pounding rain has eased, lulling many in the storm's path into believing they've already weathered the worst of it — even as rivers quietly churn and continue to rise.

The storm has claimed at least 25 lives as of Monday evening and an untold number of homes on its slow march across North Carolina, inundating city after city : Wilmington, New Bern, Lumberton. Now authorities are warning that by the time the Cape Fear River in Cumberland County crests Tuesday at 62 feet (19 meters) — 27 feet (8 meters) over its flood stage — it will threaten to swamp anything within a mile on either side of it. Its tributary, the Little River, is expected to flood, too.

More than 7,000 people were ordered to evacuate by Sunday afternoon. But many, weary of a storm that's lingered on and on, did their own rough calculus of the odds and decided to stay.

As the Cape Fear River swelled, rescue teams trudged along its banks, pleading with people to get out of its way. Police officers went door to door. The mayor of Fayetteville presented the problem in the starkest of terms: Evacuate or notify your legal next of kin.

Military trucks in rural corners of the county barreled down dirt roads quickly becoming mud pits. "Please go," soldiers asked stubborn residents along the massive river that curls downstream through small towns, farms and rural mobile home parks and into the city of Fayetteville, where the Reeses live in a subdivision that butts up against the bank.

Anissa's friend down the street was evacuating with his family and knocked on her door, begging her and her mother to come. The Reeses had packed their things just in case, tucking important documents in a water-tight bag. They stacked chairs on top of tables and moved all the family photos upstairs. Then they waited to see what would happen.

A few miles away, a high-water rescue team comprising two dozen soldiers from Fort Bragg rested on cots in an arena — preparing for water to surge into neighborhoods and send residents climbing out windows and onto rooftops, a familiar scene since Florence made landfall Friday morning.

"I want to make sure those citizens realize the decisions they're making," said Lt. John Savage, who commands the team that knocked on doors to talk with those staying behind. "We have thorough conversations with them to let them know the gravity of the situation they're in."

Over the weekend, a military truck rolled down the mucky lane to Kevin Blades' house 20 miles (32 kilometers) upstream from Fayetteville, near where the Cape Fear and Little rivers meet. Savage said there is particular concern about this area. Six horses were drinking from floodwater already pooling on the front lawn. Power had been out for days. The dirt road to the house was so soggy, the truck got stuck in the mud and Blades and a neighbor had to tow it out.

Blades informed the soldiers he planned to stay anyway and not to worry because he had an escape plan in mind. "If I have to," he said, "I'll ride the horses out of here."

The soldiers left, the Blades played cards, the rain poured on, and the river rose.

Down the road, in the tiny town of Linden, Mayor Marie Butler woke up Sunday morning and asked her son to drive her to look at the Little River. She'd encouraged her residents to leave, but just about everyone she knows decided to stay, so she felt like she had to stay, too — to sound the alarm if the river gets close to spilling over.

"It's going to get bad," her son, Thurman Jackson, replied. "There's a lot of water coming down that river."

"I'm just praying that the Lord turns it around," Butler said, looking up at the sky.

From Linden, the Little River ribbons west to a town called Spring Lake, where authorities shut down already-flooded roads and some who'd stayed put started to worry.

Mary Ingram stood outside a convenience store, open only thanks to a generator. She lives with her mother and 1-year-old son two blocks outside of the mandatory evacuation area, so she thought they'd be safe. Then it hit her: "My mom can't swim. So if it does flood, I can't save both her and the baby." She decided to stay, nonetheless.

In the tiny hamlet of Wade, population around 570, Athena Moore has been waiting out Florence in her mobile home a quarter mile (half a kilometer) from the Cape Fear River. Many of her neighbors cleared out, but she's hosting two friends who fled from the coast as the hurricane roared ashore only to find themselves now in a flood zone. They're all planning to stay, because they don't have anywhere else to go.

Back in Fayetteville, as downtown streets started flooding Sunday, Waheeda Reese finally decided it was time to pack the car and get her daughter out.

"So would you be offended if I just dropped you off and came back to stay here?" she asked Anissa.

"Kind of," her daughter said.

"Because you need to be safe, too."

Stay up to date on all the latest World news with The New Indian Express App. Download now
(Get the news that matters from New Indian Express on WhatsApp. Click this link and hit 'Click to Subscribe'. Follow the instructions after that.)
TAGS
Hurricane Florence