NEW YORK: Facebook announced Friday that up to 50 million accounts were breached in a security flaw exploited by hackers.

The leading social network said it learned this week of the attack that allowed hackers to steal "access tokens," the equivalent of digital keys that enable them to access their accounts.

"We don't know if any accounts were actually misused," Zuckerberg said. "This is a serious issue." 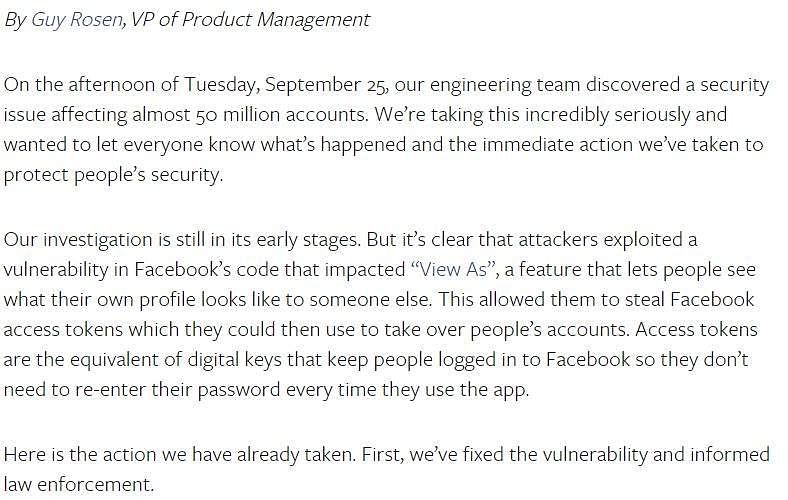 As a precaution, Facebook is temporarily taking down the "view as" feature -- described as a privacy tool to let user see how their own profiles would look to other people.

"It's clear that attackers exploited a vulnerability in Facebook's code," vice president of product management Guy Rosen said in a blog post.

The breach is the latest privacy embarrassment for Facebook, which earlier this year acknowledged that tens of millions of users had personal data hijacked by a political firm working for Donald Trump in 2016.

"We face constant attacks from people who want to take over accounts or steal information around the world," Zuckerberg said on his Facebook page.

"While I'm glad we found this, fixed the vulnerability, and secured the accounts that may be at risk, the reality is we need to continue developing new tools to prevent this from happening in the first place."

"People's privacy and security is incredibly important , and we're sorry this happened."

No passwords were taken in the breach, only "tokens" that act as digital keys allowing people to automatically  log back into the social network, according to Rosen.

Information hackers appeared interested in included names, genders, and home towns, but it was not clear for what purposes, the executives said in a telephone briefing.

The stolen tokens gave hackers complete control of accounts. Facebook is trying to determine whether hackers tampered with posts or messages in breached accounts.

Hackers took advantage of a "complex interaction" between three software bugs, which required a degree of sophistication, according to Rosen.

"We may never know who is behind this," Rosen said. "This is not an easy investigation."

Facebook this year is doubling to 20,000 the number of workers devoted to safety and security, and has taken to embedding that personnel in with product management teams, Rosen said.

When asked why people should still trust Facebook with their personal information, Zuckerberg outlined anew ways the social network is ramping up defenses.

"As I've said a number of times, security is an arms race," Zuckerberg said.

To deal with the issue, Facebook reset some logins, so 90 million people have been logged out and will have to log in again. That includes anyone who has been subject to a "View As" lookup in the past year.

Facebook says it doesn't know who's behind the attacks or where they're based.

The hack is the latest security headache for Facebook, which has been dealing with political disinformation campaigns from Russia and elsewhere since 2016.