The warships sailed north through the strait on Jan. 24, Taiwan’s Ministry of National Defense said in a statement on Thursday.

American Navy vessels sailed through the disputed Taiwan Strait, the U.S.’s first known show of force in the area since November.

The warships sailed north through the strait on Jan. 24, Taiwan’s Ministry of National Defense said in a statement on Thursday. It’s the U.S. Navy’s fourth passage since July last year, the island’s Central News Agency reported. An October sail-by prompted China to “express concern” to the U.S.

Chinese aircraft, including H-6 bombers and KJ-500 airborne early warning and control systems, also flew from the mainland Thursday through the Bashi Channel for far-sea training before returning to their base via the same route, Taiwan’s defense ministry said. 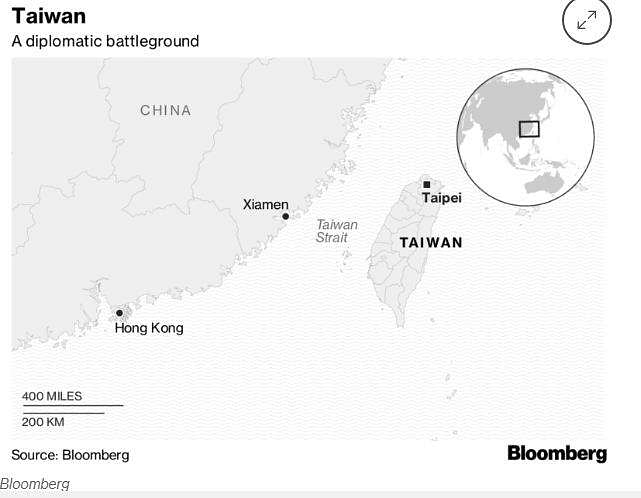 “This routine transit through international waters of the Taiwan Strait demonstrates the U.S. commitment to a free and open Indo-Pacific,” Pentagon spokesman Lieutenant Colonel Christopher Logan said in the CNA report. “The U.S. will continue to fly, sail and operate anywhere international law allows.”

Chinese foreign ministry spokeswoman Hua Chunying urged the U.S. to abide by the “one China” principle at a briefing in Beijing on Thursday.

“We already expressed our concerns to the U.S. side,” she said. “We urge the U.S. side to abide by the ‘one China’ principle and our three communiques so as to avoid harming bilateral relations as well as the stability across the Taiwan straits.”

The U.S. vessels’ transit comes during a period of rising tension between Taiwan and China, which considers the island one of its provinces. Since the election of Taiwanese President Tsai Ing-wen from a pro-independence party in 2016, Beijing has cut off formal communication with Taipei and stepped up military exercises in the area.