Pakistani F-16 pilot was mistaken to be an Indian, lynched by his own: Report

Wing Commander Shahaz-ud-Din flew for the crack 19 Squadron of the Pakistan Air Force and was the son of an Air Marshal, who had flown both the F-16 and the Mirage 2000.

On the day Pakistan handed back IAF fighter pilot Abhinandan Varthaman to India at Wagah, news has emerged that the Pakistan F-16 pilot Wing Commander Shahaz-ud-Din, downed on Wednesday, ended up being lynched by a mob in Pakistan occupied Kashmir (PoK) after being mistaken for an Indian.

According to journalist Aditya Raj Kaul, the pilot of the crashed PAF F-16 was Wing Commander Shahzaz-ud-Din of the No 19 Squadron (sherdils). Russian TV channel RT news also quoted another journalist Ajay Jandyal confirming that the pilot was Shahzaz . 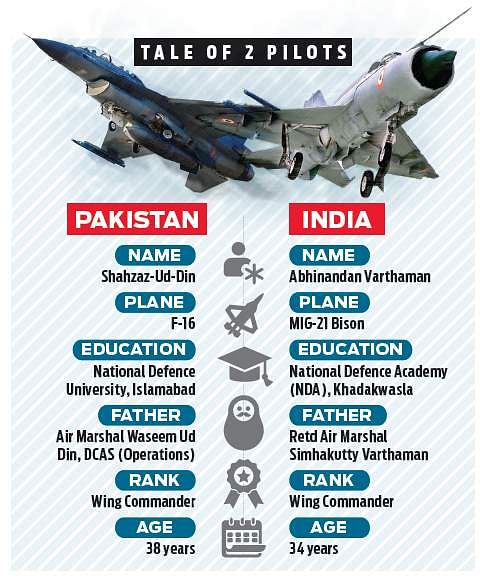 The news of the Pakistan F-16 crashing was first reported by London-based lawyer Khalid Umar. Firstpost's Praveen Swami now claims that Umar was told by relatives of Shahaz-ud-Din of the sad fate that befell him.

Umar says that after parachuting out of his aircraft, Shahaz landed in the Laam valley that stretches westward from Naushehra to PoK. He was attacked by an angry mob who mistook him for an IAF pilot and ended up lynching him.

The Wing Commander flew for the crack 19 Squadron of the Pakistan Air Force and was the son of an Air Marshal, who had flown both the F-16 and the Mirage 2000.

ALSO READ: Those baying for war should fight it themselves, says widow of Squadron Leader

Pakistani military spokesperson Major-General Asif Ghafoor had on Wednesday asserted that two Indian jets were shot down and two Indian pilots were captured. He had tweeted that while one of these pilots was in Pakistan armed forces' custody, the other had been admitted to the hospital.

Swami quoted an Indian source as saying that the second 'Indian' pilot whom Ghafoor had initially spoken about might have been Shahaz.

"There was probably miscommunication up the chain of command,” the military source explained.

Stay up to date on all the latest World news with The New Indian Express App. Download now
(Get the news that matters from New Indian Express on WhatsApp. Click this link and hit 'Click to Subscribe'. Follow the instructions after that.)
TAGS
Shahaz-ud-Din Abhinandan Varthaman F-16 Khalid Umar