CG Power had in August said that a probe revealed that nine wrongful transactions, allegedly undertaken by promoter Gautam Thapar, had led to losses of Rs 3,000 crore.

Having taken a Rs 3,000 crore beating due to a large scale fraud allegedly perpetrated by its promoter and top management recently, power plant equipment maker CG Power and Industrial Solutions is now seeking a way to bounce back.

The company’s Board of Directors has called its annual general meeting on December 14, and notices sent to shareholders reveal that the company plans to seek their nod to raise as much as Rs 5,000 crore to power its recovery. 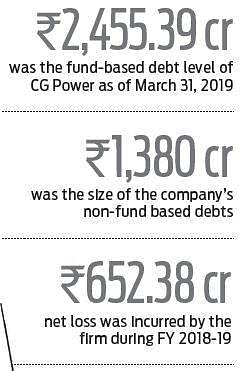 “Keeping in view the existing borrowing and additional fund requirements and given the current financial condition of the company, the company is in urgent need of both long-term capital and working capital,” the notice said, “And towards this, the management of the company is in the process of identifying potential sources of capital”.

The company is now running consultations with experts on the mode and possible sources of fund raising. “Hence, approval of the members (or shareholders) is sought for availing borrowings up to an amount of Rs 5,000 crore for meeting the immediate funding requirements of the company,” the notice says.

CG Power had in August said that a probe revealed that nine wrongful transactions, allegedly undertaken by promoter Gautam Thapar, had led to losses of Rs 3,000 crore. Thapar, who was non-executive chairman of the company, was subsequently sacked on August 29.

In its first annual report since the crisis erupted, released in November, new chairman Ashish Kumar Guha had said that the company considers any further association with Thapar as prejudicial to its interests and that of its shareholders. “Corrective actions will follow in future,” he had said.

Guha had also hinted at how the company is planning to get back on its feet. The board of directors was in active discussions with its lenders to restructure its borrowings and enable the infusion of fresh capital.
“The company is evaluating the divestment of non-core assets, and reviewing its international business,” the annual report had said.

In order to power its recovery, CG Power and Industrial Solutions is also planning to initiate the recovery of receivables from promoter affiliate companies and connected parties based on consultation with independent legal counsel.

Now we are on Telegram too. Follow us for updates
TAGS
CG power