Initial estimates peg the Centre’s fiscal outlay at 0.75-1.3 per cent of the GDP projected at Rs 210 lakh crore in FY21.

HYDERABAD: The big question doing the rounds on Sunday regarding the Atmanirbhar Bharat economic package was this: How much of the total Rs 20.9 lakh crore will be paid out of the public purse?

Initial estimates peg the Centre’s fiscal outlay at 0.75-1.3 per cent of the GDP projected at Rs 210 lakh crore in FY21. In absolute numbers, the Centre’s financial outgo this fiscal will be Rs 1.5-2.73 lakh crore against the total Rs 20.9 lakh crore, according to separate estimates by Barclays and Care Ratings.

The reason for the stark difference between the two estimates is that Barclays’ excluded the Rs 1.5 lakh-odd crore allocation made for farm infrastructure and related activities as part of the economic package.
If you exclude the allocations already made during February Budget, cash on the barrel this fiscal will be even less at a little over Rs 1 lakh crore.

And if you exclude expenditure on coal evacuation, which typically is spread across years and given the long time lags in getting clearances making expenditure uncertain this fiscal, then the FY21 outflow will be nothing but chicken feed at Rs 75,000-80,000 crore.

Consider the break-up. Of the total package, Rs 8.01 lakh crore was from RBI. Besides, the government’s first stimulus announced in March stood at Rs 1.92 lakh crore, of which Rs 80,000 crore is considered as beyond the FY21 Budget allocation.

It means, the five tranches of economic package announced between May 13 and 17, had additional capital allocations worth Rs 11.75 lakh crore, much of which includes credit guarantees.

“Although, the actual outflows from the Central government is not clear, as per our calculations, it could be around Rs 1.3 lakh crore,” noted Rahul Bajoria of Barclays. That’s because, some allocations like the Rs 20,000 crore earmarked for fisheries infrastructure spending could spill over to next fiscal as well.

For FY21, expenditure budget stood at Rs 30.4 lakh crore. To this, the additional spend due to the economic package could be Rs 1.5-2.7 lakh crore if you include total agricultural outlay at one go, which is highly unlikely.

Mindful of the rising expense, the Centre has already embarked on expenditure compression asking departments to rationalise spends by 60 per cent during the first quarter, besides freezing dearness allowance to Central government employees.

This means, additional expenditure due to Covid-19, likely shortfall in tax collections and increased debt could take India’s fiscal deficit to 6 per cent of GDP in FY21. If one includes states’ fiscal deficit, it could be go up to 12 per cent of GDP, a first in decades. In absolute numbers, it implies an overall borrowing of close to Rs 25 lakh crore. 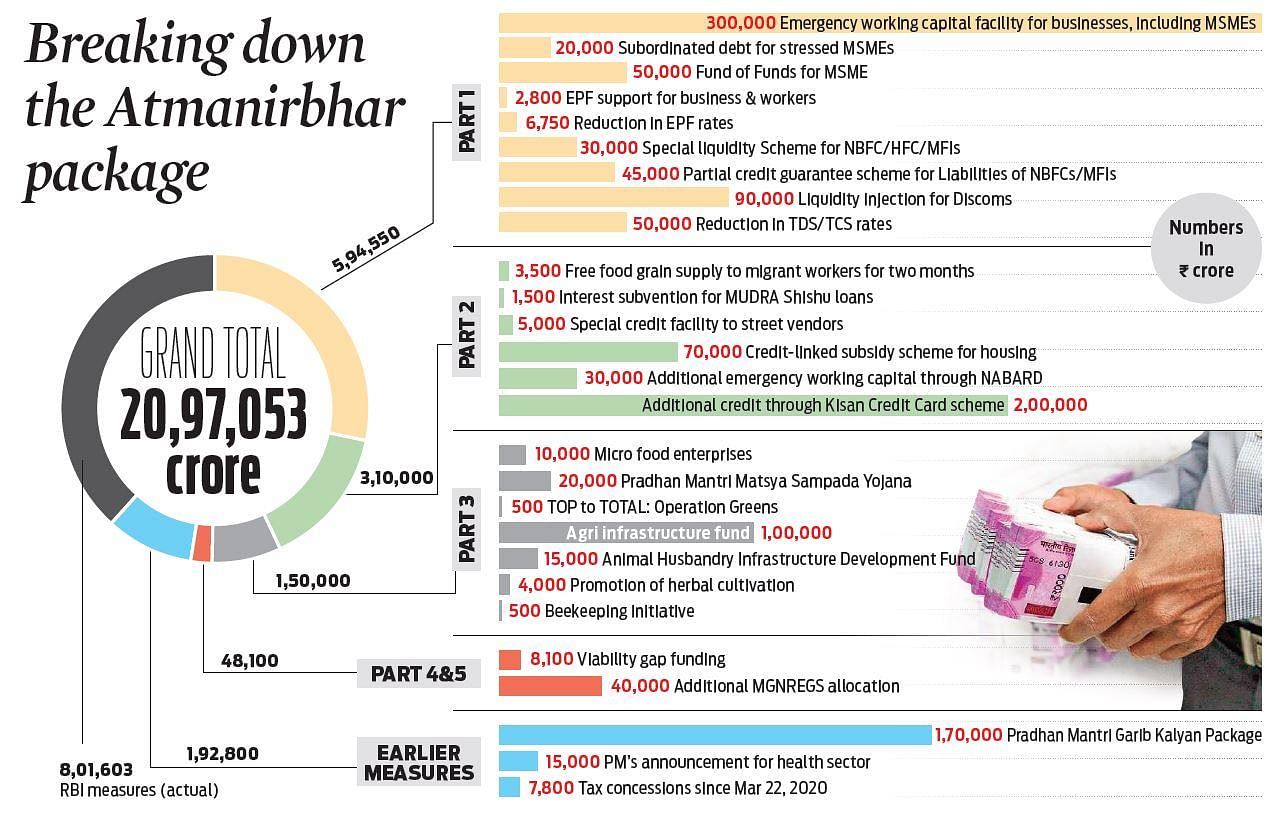 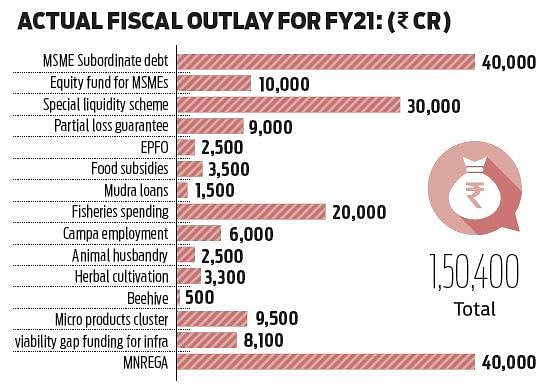 Now we are on Telegram too. Follow us for updates
TAGS
Nirmala sitharaman COVID budget COVID economy revival