Vedanta submits EoI for BPCL, other players in race

According to government sources, a foreign bidder is also in the race for the oil marketing company. Officials say that a special purpose vehicle has been floated by BSE-listed Vedanta Ltd.

NEW DELHI:  Minerals major Vedanta  on Wednesday confirmed that it has put in a preliminary expression of interest (EoI) regarding buying the Centre’s majority stake in Bharat Petroleum Corp Ltd (BPCL). According to government sources, a foreign bidder is also in the race for the oil marketing company. Officials say that a special purpose vehicle has been floated by BSE-listed Vedanta Ltd.

“Vedanta’s EoI for BPCL is to evaluate potential synergies with our existing oil and gas business. The EoI is at a preliminary stage and exploratory in nature,” the company said in a statement. According to official sources, the government has received around 3-4 EoIs for the OMC and the second stage of the disinvestment process will now begin. 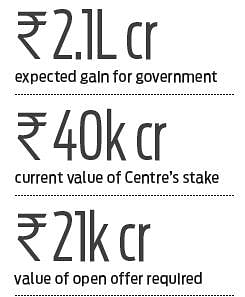 This will entail the Transaction Advisor examining the received EoIs and verify their eligibility. Then, request for proposal (RFP) will be issued to the companies to submit financial bids. According to sources, a foreign company and other funds form the other bids, though they did not reveal the names.

The government is selling its entire 52.98 per cent stake in India’s second largest fuel retailer as part of plans to raise a record Rs 2.1 lakh crore from disinvestment proceeds in 2020-21 (April 2020 to March 2021). But the share price of BPCL has plunged by nearly a fourth since the time the strategic sale was approved in November last year.

At Wednesday’s closing price of Rs 383.20 on the stock markets, the government’s 52.98 per cent stake in BPCL is worth just over Rs 44,000 crore. Also, the acquirer would have to make an open offer for buying another 26 per cent stake from the public, which would cost about Rs 21,600 crore.

Vedanta’s interest in BPCL stems from its $8.67 billion acquisition of oil producer Cairn India nearly a decade back. The company produces oil from oilfields in Rajasthan which are used in refineries such as those operated by BPCL to turn them into petrol, diesel and other fuels. The government had at the close of bidding stated that “multiple” EoIs had been received for the company.

Now we are on Telegram too. Follow us for updates
TAGS
BPCL Vedanta