Motor down to Dhaba for perfectly spiced  meat and roadie selfies

2017 was a foodie’s year and as a final tease, the ninth outlet and Bengaluru’s second outpost of Dhaba Estd 1986 Delhi was opened in Marathalli on December 21.

BENGALURU: 2017 was a foodie’s year and as a final tease, the ninth outlet and Bengaluru’s second outpost of Dhaba Estd 1986 Delhi was opened in Marathalli on December 21. The colourful retro Bollywood themed restaurant is located on the first floor of NTR Royal Plaza Home Building.

The menu has the same signature recipes introduced in 1986 such as the Palak Paneer ki Seekh, Balti Meat and Chitta Butter Chicken, but it also includes experiential Highway Specials such as the Burni Mutton. These two sections are further divided into three on the basis of its cooking techniques: Tawa, Tandoor and Patila; all are finger-licking good. 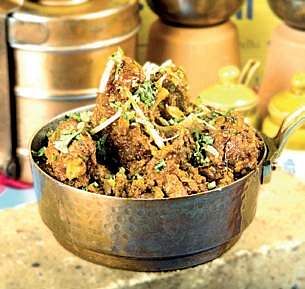 Tandoori Bhune Aloo is a not-to-miss. Baby potatoes are roasted crisp and shallow fried and tossed with onions and saunth chutney, and has an electric burst of masalas including tangy imli chilli. Executive chef Ravi shares that the secret magic lies in three steps which turn the potatoes a smoky golden culinary experience.

The Chitta Butter Chicken was invented when the song Chittiyaan Kalaiyaan Ve went viral in 2015. Under the Patila section, this butter chicken is white in colour and is marinated, cooked in tandoor and finished in creamy onion and yoghurt gravy. However, the authentic Butter Chicken 1986 is distinct not just in colour but also in flavour, because this one has been simmered in creamy tomato gravy. As a lover of prawns, I am delighted to see succulent juicy ones that are served grilled-hot. Marinated in ginger, lemon juice and curd, the prawns is a crisp and tender bite. It has a lingering fragrance of smoky ginger lime.

The sliced mutton of Balti Meat gives out a powerful and pleasing masala-rich fragrance. Served in a steel bucket, the mutton pieces sourced from Jaipur. The flavours are bold and you can find traces of tomato puree and garlic. You need your fingers to eat this one. Another signature dish which I savour is the daal with ghee.

The desserts include Badam Halwa, Rabri and Rasmalai and Kesri Phirnee. Do not miss Dhabe D Mitha, a four-layered sweet that just melts in your mouth.

While you relish the experience, there are quite a few selfie spots to give yourself the vibe of road travel in the 80s. Cost for two: `1,400.