Sharing stories, from Bali to Bengaluru

In July 2016, five Balinese dancers and five Bharatanatyam dancers met in Bali to work on the choreography.

BENGALURU: There are quite a few things that are unique in this upcoming presentation of Mahabharata in the city. For one, the production, titled Pralaya, has puppets playing an important part. It is also a collaboration of Bharatanatyam, Balinese dance and Topeng mask dance. The puppets featured in the production are selected from Wayang Kulit Parwa, a Balinese shadow puppet play enacting Mahabharata stories, says Balinese choreographer Dr Wayan Dibia, who will be in town for the performance.

“The two masks used in Pralaya are traditional masks. The mask for Sage Wyasa, an old man with long beard, is taken from Balinese masked dance theatre – topeng; the elephant mask for Ganesha are traditional ones used in many classical dance dramas. In traditional Balinese performing arts, the old man represents the good and wise man, who always gives advice to young people. Ganesha is highly regarded and respected as the god with protective power,” says Dr Dibia. The puppets are equally selected from both the Pandawa (Yudhistira, Bhima, and Arjuna) and Kaurava side (Duryadana, Dussasana, and Sakuni). The selection of these puppets is based on the principal characters portrayed in Pralaya. 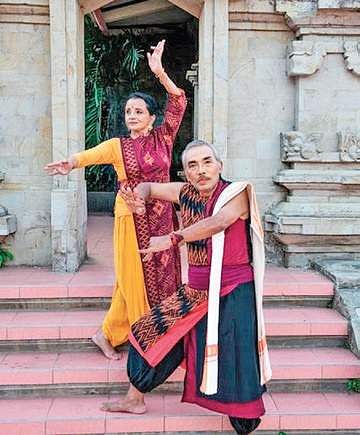 The play is a tale of two feuding cousin families, the Kauravas and the Pandavas, who fight one another for the throne of Hastinapura, and is set to be staged in the city on December 10. Performed by a cast of 10 including celebrated artistic director Lata Pada, Pralaya speaks of dynastic conflict, earth-shattering chaos and an abiding calm in the end. A  game of dice determines a terrible defeat for the Pandavas who are forced into exile, only to return and win the great battle of Kurukshetra.

Speaking about the upcoming performance, Pada recalls that after living in Indonesia for a decade, she visited Bali in 2012 to pursue her interest in Ramayana and Mahabharata performance traditions of South East Asia. “It was during my visit to Bali when I met eminent Balinese scholar/choreographer Dr Dibia. It was a spontaneous coming together of a unified vision of authentic collaborative work that would respect and celebrate our cultural traditions,” says Pada. She emphasises on how the Mahabharata was a natural choice and that its contemporary resonance in today’s times was the central message to convey through the collaborative dance-theatre production.

Pada visited Dr Dibia again in 2014 to lay the groundwork for movement language that would develop from Balinese and Bharatanatyam dance traditions, music score, visual projection and costume design. In July 2016, five Balinese dancers and five Bharatanatyam dancers met in Bali to work on the choreography. “The dancers were taught the basics of each other’s styles essentially to find a choreographic methodology for integrated movement that would synthesise techniques from each style,” she says.

Pralaya will be staged on December 10 at Chowdiah Memorial Hall, Malleswaram.

Stay up to date on all the latest Bengaluru news with The New Indian Express App. Download now
(Get the news that matters from New Indian Express on WhatsApp. Click this link and hit 'Click to Subscribe'. Follow the instructions after that.)
TAGS
Bengaluru