This inventory will take around 4-5 quarters to get absorbed: Expert

BENGALURU: Bengaluru’s real estate sector has shown some revealing trends. While one study shows there has been a decrease in the sales of residential accommodation another found that purchases of homes depend substantially upon vaastu compliance. A recent study by 99acres.com found the city had around 70,000 unsold housing units, about 52 percent of the total supply, in the beginning of October 2019 and the current unsold inventory would take around four to five quarters to get absorbed. 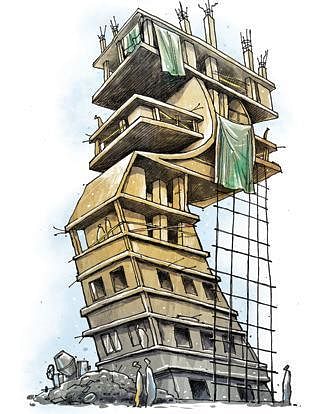 Maneesh Upadhyaya, Chief Business Officer, 99acres.com, told The New Indian Express: “Like Delhi-NCR and Mumbai, Bengaluru also reported increased demand for affordable housing units against the meek supply. So, sales remained low-key in the last quarter of 2019 even as Bengaluru reported improving commercial landscape with 7.8 million sqft of office space absorption from July to September 2019. The lag is due to the implementation of smart city projects and delay in land acquisition for Namma Metro marred market sentiment. The city’s realty fortunes are largely dependent on timely completion of infra projects and improved supply in the budget housing category.”

The study also showed that some micro-markets in Bengaluru’s eastern and southern belts such as Hulimavu, Brookefield, Kundalahalli and Bannerghatta, have each clocked a price appreciation of four percent quarter-on-quarter. RT Nagar in the north also scored four percent hike in average capital values in the quarter ending December 2019. HSR Layout in South and Vidyaranyapura in North on the other hand saw maximum dip of five percent in property prices from October- December compared to July-September 2019.

Meanwhile, another study by Mahindra Lifespace Developers Limited (MLDL) revealed that homebuyers, especially in India’s tech hubs including Bengaluru, Hyderabad and Chennai, considered Vaastu the most important factor in their purchase decision. The study showed that 82 per cent home buyers in Hyderabad respondents consider Vaastu the biggest influencing factor against the national average of 40 per cent. Chennai ranked a distant second along with Bengaluru, with both at 47 per cent. As far as Vaastu is concerned, the most tech-savvy cities in the country appear to also be the most culturally rooted.

Homebuyers in Mumbai and Pune appeared mostly indifferent to Vaastu, as only 11 per cent and 17 per cent people respectively preferring Vaastu over other factors.Sunil Sharma, Chief Customer Officer, Mahindra Lifespaces, told The New Indian Express, “Location, cost and brand value are vital considerations for selecting homes across India. But, as our study reveals, Vaastu is among the biggest influencers of purchase decisions. Vaastu-compliant homes are widely believed to render positivity and success; and consumers seem to hold this belief close to their hearts when it comes to big-ticket purchases such as homes.”