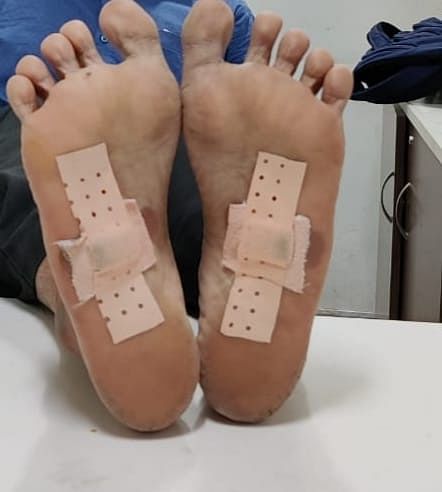 BENGALURU: A total of 29,400 foreign cigarettes and 310 grams of gold were seized by the Air Intelligence Unit of the Bengaluru Airport customs in three separate smuggling incidents on
Saturday. A novel method that they came across this time was gold cut pieces pasted under the feet using bandage by a flyer.

Elaborating on the unique kind of concealment they encountered this time, a senior customs official said that 116.49 grams of gold was seized from a passenger from Murdeshwar in Karwar district of Karnataka.

He had arrived by a Fly Dubai flight (FZ 4007) from Dubai to the Kempegowda International Airport.

"The 25-year-old passenger had placed gold cut pieces under  his feet and used bandage to conceal them. Based on passenger profiling, we held him."

The other incident involving seizure of gold involved a passenger from Tiruchirappalli district in Tamil Nadu. "He was wearing gold jewellery coated in Rhodium escape detection. The 45-year-old was also caught based on profiling only and he had also come by a Fly Dubai flight," the official added. A total of 194.25 grams of gold, valued at Rs 9.03 lakh was seized from him.

The third seizure on Saturday involved cigarettes. A Mangaluru native who had brouught them had concealed it in his check-in baggage, the official said. He had arrived by an Emirates flight (EK 254) from Dubai around 9 am.

Now we are on Telegram too. Follow us for updates
TAGS
Bengaluru airport Gold smuggling cigarettes