CHENNAI: The Narendra Modi-led government has been taking pains to implement 10 per cent reservation for students from Economically Weaker Sections (EWS) of the forward castes in Central government-run institutions like the IITs in this academic year itself. But the data provided by the Indian Institute of Technology-Madras shows that students from the forward castes are already represented by as much as 50 per cent in the institute. Also, the students whose annual parental income is lesser than Rs 10 lakh constitute about 50 per cent. The data raises questions when the students from the forward castes and from families with lesser than Rs 10 lakh annual income are already well represented, whether the new 10 per cent reservation is needed. 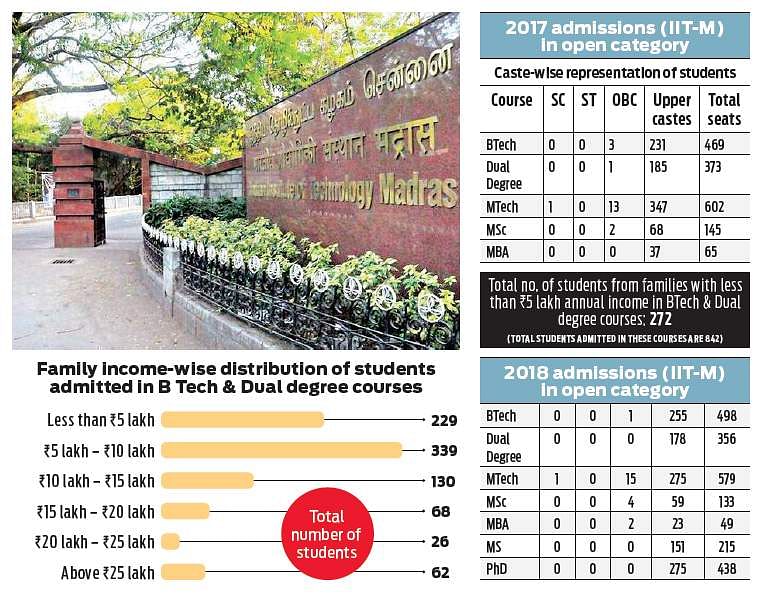 The RTI replies from IIT-Madras were obtained by E Muralidharan, a former member of the Board of Academic Research of the institute. The information shows that almost all the seats in the open category, which constitutes 50 per cent, were taken by students from the forward castes. For example, in 2018, out of the total 498 seats in BTech courses, 255 were taken by forward castes students. Of 256 seats in the open category, just one Backward Classes student was admitted.

Muralidharan also pointed out the Supreme Court’s order that the reservations are a tool only to enable representation of not already represented sections. He says that he had filed an RTI petition with the Union HRD ministry seeking admissions data from all the IITs, but the ministry had declined. However, the caste-wise distribution of students in all IITs must be similar to that of the IIT Madras since admissions were conduced through common counselling.

Now we are on Telegram too. Follow us for updates
TAGS
EWS IIT-M EWS quota  Backward Castes