Generations of humans rise and fall within the lifetime of one tree, and yet we have managed to shake its very foundation with our irresponsible and careless lifestyle.

CHENNAI: Generations of humans rise and fall within the lifetime of one tree, and yet we have managed to shake its very foundation with our irresponsible and careless lifestyle. While most adults are still oblivious to the consequences of a destroyed environment, kids have now formed the strongest and loudest voice in the environment struggle, in the hope to live in a pollution-free environment.

Tapping into this voice, M Yuvan, naturalist, author and educator, launched his book Saahi’s Quest, on October 3. “I have woven into the story personal observations that I’ve made of different insects, their behaviour and their life-history, through Saahi’s journey,” he says.

Tell us about the storyline. Saahi’s Quest is about a Wandering Glider Dragonfly, one of the longest travellers in the insect world, who is born in a paddy field. Once she emerges out of water and unfurls her wings, she flies around the land, over the paddy, to the lake, through scrubland, meets other insects and creatures she shares the land with, and learns about their lives and roles. It took two months to write, including the time taken to tweak the story, in discussion with Tanya Manjumdar and Sujatha Padmanabhan, editors at Kalpavriksh. 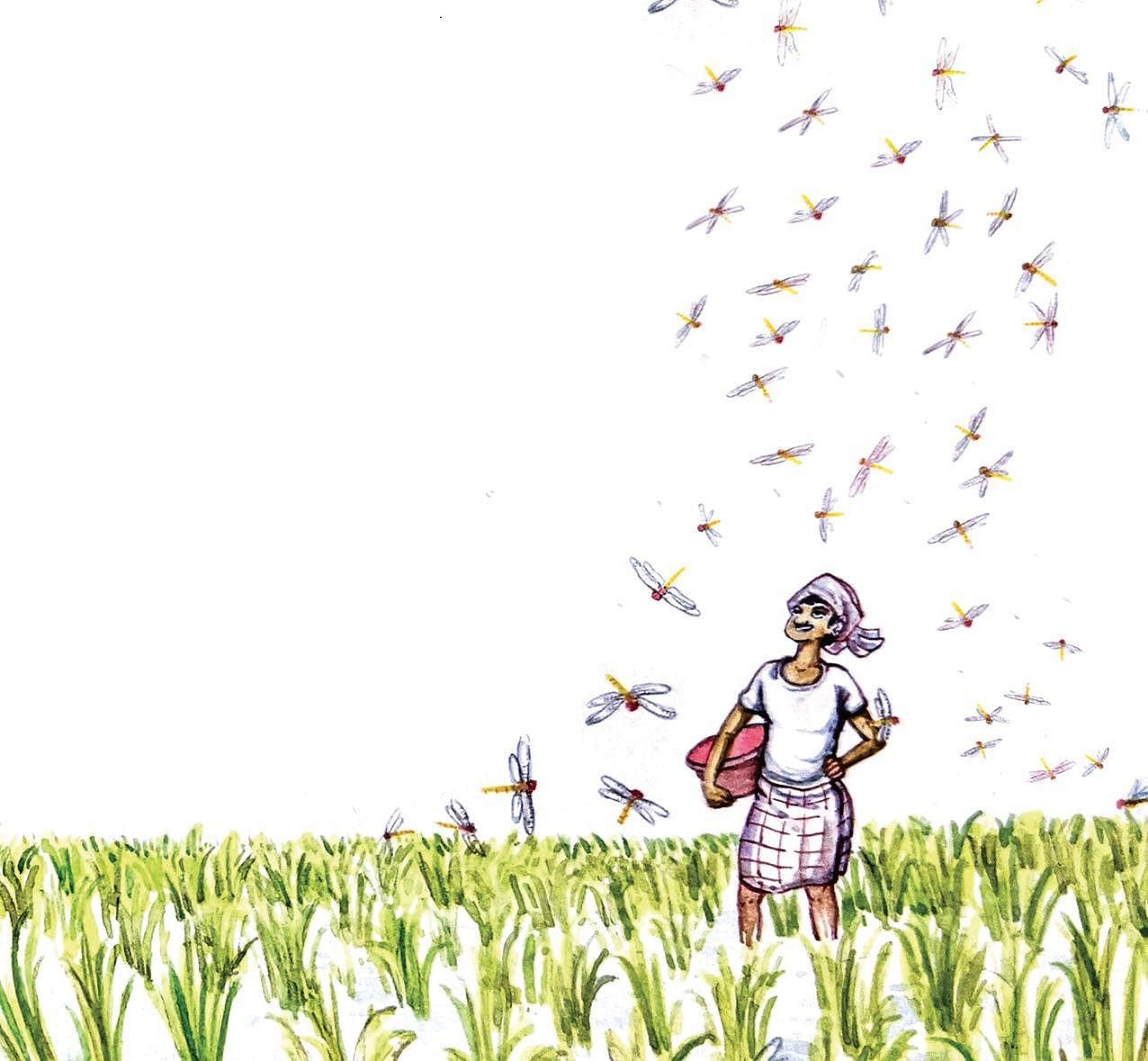 How was the story idea born?
I shared a few story ideas to Kalpavriksh. They liked this one the best. I am part of running the Songlines Farm School — an alternative education space where children learn about ecology, farming and society. There, during weeding, manuring and transplanting of paddy we see a lot of Wandering Gliders mating, laying eggs and their nymphs in paddy water and slush. These scenes were formative in giving rise to Saahi’s Quest.

Why did you choose to appeal to children?
The insect world around us is fading fast. Bees, dragonflies, wasps, moths and so many other species are no longer seen in the numbers they once thrived in, due to human-induced factors like habitat loss, pollution, pesticide use etc. Their glitter in our gardens, wetlands, grasslands is vanishing. This is a concern for us too, as many insects are crucial pollinators, detritivores and natural pest controllers. I hope through this book children are awakened to the insect world, and possibly become its guardians, and that in return, insects may always keep them company.

How effective is storytelling in terms of spreading environmental awareness?
Stories move us more than facts. If you read the folklore of various indigenous communities, they hold the kinship between them and their land. These bonds are strengthened with each telling. When such stories are forgotten, the relationships are forgotten too. I am happy that I got to publish through Kalpavriksh, a group started by Ashish Kothari, whom I consider an important mentor for the work I do. Their children’s book series is contextualised in India and its landscapes, biodiversity, and that puts children in touch with their immediate sensorial environment. Saahi’s Quest is set, in my mind, in the paddy fields of Kanchipuram.

What did you consider making a dragonfly the protagonist (as opposed to butterflies or moths)?
I had many insects in mind around which I wanted to write the story. Dragonflies, especially Wandering Gliders, have been weather-tellers for farmers for centuries. They hitch onto the monsoon winds and travel all over the world. Farmers look at their population in the sky and predict the rains. These insects are inter-communicators between farmers and the sky. They are the rain’s foreword and season’s speech. Large swarms indicate good showers and hence bountiful harvest. They also eat crop pests like moths, bugs, midges etc. both in their nymphal and adult stages.

Is there something for adults to take back from the book?
Something adults will hopefully take back and think about from a book like this is the importance of the natural world — insects, trees, birds, soil, sky, lake — for the well-being and holistic development of children. Various visionary educators — including Maria Montessori, J Krishnamurti, Richard Louv and Gail Melson — have pointed out that learning in and from the wilderness is essential for the moral, social, emotional and cognitive development of a child. Children are an extraordinary protective charm for nature too, when they are in touch with, experience, learn and grown in it .

How did you and Anusha Menon plan the illustrations?
The best thing about the book is Anusha Menon’s paintings. She has breathtakingly conjured the insect world in it. Dragonflies, damselflies, butterflies, antlions, lady birds, whirligigs, millipedes, etc., crawl out of these pages. Here and there, I described the insects to her, sent her pictures. Like a magician with a paintbrush she brought them to life on paper.

What do you think about the evolving participation of children in the environment struggle?
In Chennai, a struggle goes on to save Vedanthangal bird sanctuary from plans for commercial development. One of the most powerful parts of the movement is the children’s art campaign for it. Students from so many schools across Chennai have been making art, asking to save Vedanthangal. And this has all of India sit up and take note. It has brought in numerous more voices to the campaign. Young people are at the forefront of the climate justice movement in the country. Children — by taking a stand — can be astonishing agents of hope and change.

According to Nielsen Book Research, children’s books on climate crisis have more than doubled in the past couple of years, but how much is too much in terms of burdening them about this crisis? Unfortunately, the climate crisis is not a burden created by book writers, but a reality manifested by earlier generations due to their ecologically and inter-generationally harmful lifestyles, politics and ideologies. And this burden has been passed on to the present and future citizens of the world, though they’ve played no part in it. Storytelling throws light on this.

The tone and intent of the writer can create a call for action, to question, to become aware. I can think of The Lost Words by Robert Macfarlane, The Cloud Called Bhura by Bijal Vachharajani, Bird Business by Rohan Chakravarthy, and others which have engaged children so deeply with their subjects and beyond it. Books on our local bio-diversity, habitats and places are as important as those on the climate crisis and its causes itself, as, in the words of educator Julie Singleton, “Love of place and a sense of connection or belonging are foundational toward development of sustainability values”. It’s difficult to protect what we don’t love, or have forgotten to. The book is available on the Kalpavriksh website and other online platforms and bookstores. ‘Saahi’s Quest’ is for 6 years 6 and above.