CHENNAI: Body-positive activist, model-cum-actor Mallika Angela Chaudhuri is a textbook optimist with a great fighting spirit, to say the least.

Constantly on the search for the brighter side of life, learning the art of attaining authentic happiness and looking at the truth in lies, the tattoo artist, besides adorning people’s bodies with aesthetic and unique artworks, often sparks conversations about the ‘rainy brain’ and ‘sunny brain’ (both, she says, are important to understand optimism and tread away from toxic positivity).

But, the journey of reaching this zenith — of accepting life as it comes — came with its set of trials, tells the creative, who recently joined hands with photographer G Venket Ram, for a ref reshing body - positive photoshoot.

A magnificent Kalamkari peacock tattoo in rich imperial blue, green and red hues stretching from Mallika’s right shoulder to her left ankle; her body suffused with soft light and a calm and confident reflection of herself in a mirror, are what meets our eye, as we scroll through the photographs on her Instagram page.“It was a liberating experience.

It’s amazing how Venket has captured the aesthetics without compromising on the composition and vice-versa,” she notes, about the seven-odd-hour shoot, which took place in August. 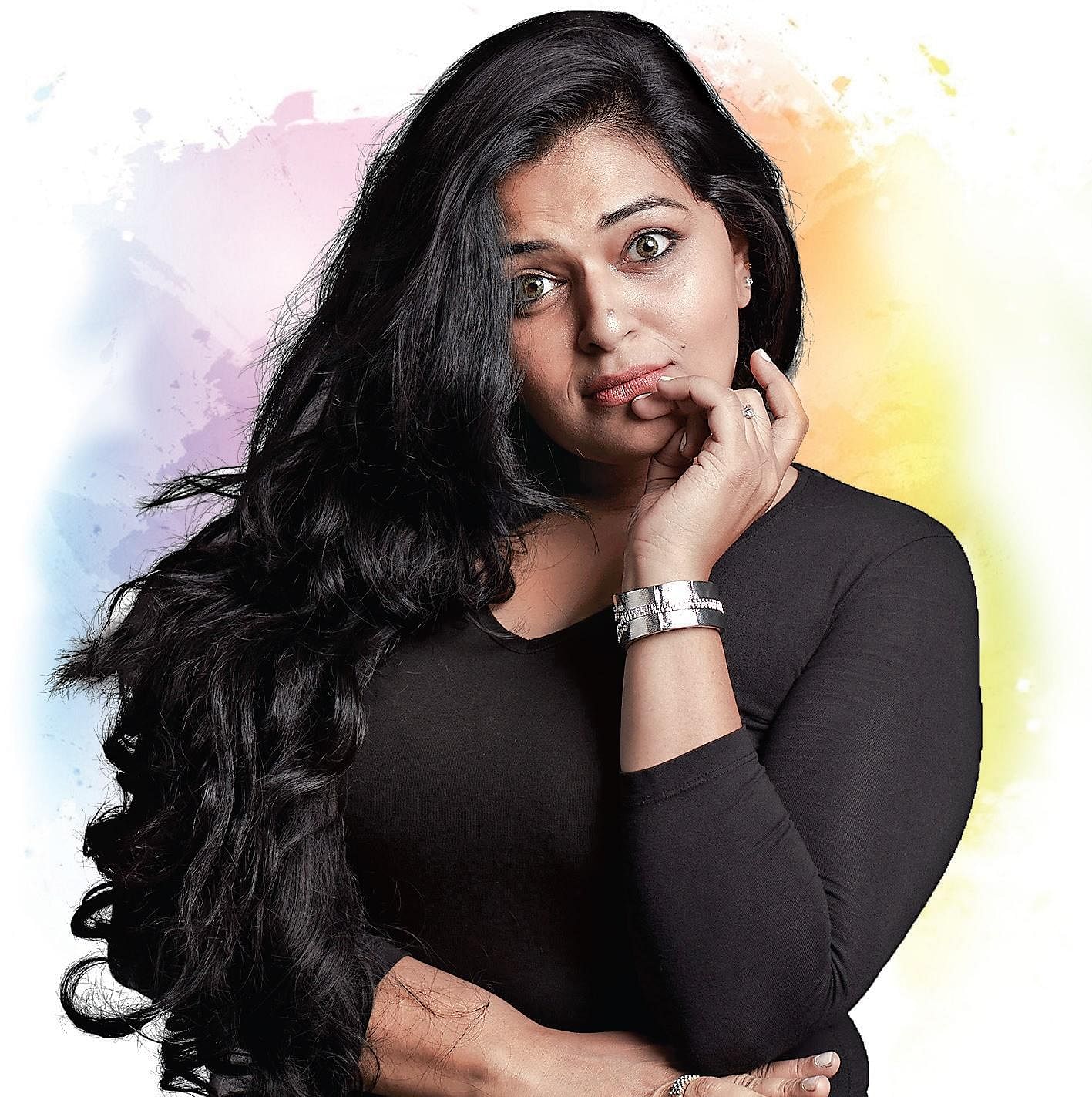 Tattoo tales
Recalling how the peacock serendipitously strutted into her life, Mallika narrates, “In 2019, after a year of enduring a heartbreak, a spiralling mental health condition and whatnot, I received a respite in the form of the Goa Tattoo Festival. As a tattoo artist, this was an opportunity that I couldn’t pass.

At the convention, I turned canvas for awardwinning tattoo artist Gauriishankar Mistry but little did I know that this experience would be life-altering and a rebirth of sorts.” In the backdrop of glistening beaches, crashing waves and shimmering sand at the quaint Anjuna, while getting her body tattooed for 60-odd hours, three days, with 19 needles, Mallika went through an ethereal experience. “With limited breaks in between, many thought I would surrender to the pain and exhaustion.

But to everyone’s surprise, and even to mine, I endured. Interestingly, though several needles were used, I wasn’t aware of the pain. To me, it felt like the existing mental pain was being cured with every prick, one inch at a time,” she shares, about the artwork, the largest tattoo done at the convention in a single sitting. “Usually such tattoos are done in pieces and in multiple sessions. But we were able to pull it off in a single sitting. It showed me what our bodies are capable of and made me love it more. Incidentally, the peacock is symbolic of self-love, integrity, honour and rebirth!” she exclaims.

Staying positive
A local voice in the steadily growing body positivity movement, Mallika has been riding the wave, taking the message of self-love to women and men, enabling those who have been marginalised for their body shape, size and colour, embrace themselves. “I want to love myself in any form; not feel guilty about how I look and not deprive my body, mind and soul of any form of love. Who decides and dictates what a ‘perfect body’ should look like?” she asks, over a phone call.

‘High five!’ we hear her exclaim. “I have 15 dogs at home. Most are rescue dogs. Over time, through experiences, I have learned to do what makes me happy,” says Mallika, as she pets her dogs on the other side of the line. The Indo-Canadian actress, who came to India six years ago in search of opportunities in the mainstream south Indian celluloid biz, was in for a rude shock when she was given unsolicited advice to ‘lose her curves’ to fit the part, body-shamed and rejected for looking unfit.

“There were several rejections and I was quite shocked by the degree of shaming that was happening not just in the industry but also the standards that were set in the society for the ideal body. Despite the challenges, I decided to take up the cause of promoting body positivity,” shares the founder of two-yearold Laughing Budda Tattoos. In 2017, unfazed by the unrealistic standards set, she started the ‘Love Every Body’ campaign to curb body shaming and promote self-love. “As part of the campaign, we came out with a calendar featuring people of different size, height and colour.

Venket Ram shot the images for the calendar too,” she says. The idea, Mallika says, is to create a positive ripple effect, making people unlearn societal conditioning. Pointing to Venket Ram’s post on his social media page which read: ‘Working with Mallika was are refreshing and novel experience. As a norm, we tend to choose models on the skinnier side for a fashion shoot. I had worked with her earlier on a calendar which centered on positive body image. When she told me about the tattoo she had on her by award-winning artist Gauriishankar Mistry, I was intrigued...

It’s amazing to work with someone who’s so comfortable and secure with her body and that confidence shines through in every shot.’ she says that it is this kind of a wave, she envisions. “If someone as accomplished and talented as Venket Ram is able to unlearn, change his views and pave way for a new path, it will certainly influence his followers. That will be a desirable change for the whole community. Through this shoot, I was able to not only showcase a brilliant piece of art but also embrace the curves and rolls that my body is made of without having to worry about anyone or anything.

Many women messaged me after seeing the photos…they said it had given them the confidence to love their body and flaunt it,” she shares, in a chirpy tone. Redefining beauty norms and teaching people the art of loving themselves just the way they are, Mallika is now set to make her OTT debut with director Venkat Prabhu’s venture Live Telecast. “This is a change. From being rejected to finding a place, it’s been a process but a gratifying one. This is a step in the right direction,” she concludes.

Love Every Body
In 2017, unfazed by the unrealistic standards set, she started the ‘Love Every Body’ campaign to curb body shaming and promote self-love. “As part of the campaign, we came out with a calendar featuring people of different size, height and colour. Venket Ram shot the images for the calendar too,” she says.

Now we are on Telegram too. Follow us for updates
TAGS
Tattoo body positivity