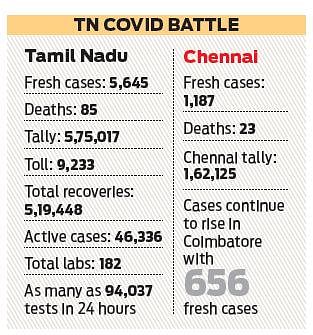 “We have not changed the containment strategy as such. Now, there are no streets with three or more index cases and hence, no containment zones. If it were to occur in future, the street will be contained as usual,” a senior corporation official told TNIE.

Former Director of Public Health K Kolandaisamy told TNIE that lack of three or more index cases or families affected with Covid in the same street could be possible at this point of time. “Covid first spread in densely populated areas of the city where cases are more likely to occur in clusters. Since then, the infections have moved on to other places like Anna Nagar and Adyar where such clusters are less likely,” he said.

The city corporation has already done away with its tin-sheet-containment strategy where the entry points to a house with Covid patients were sealed with tin sheets to keep the residents from going out until the end of their quarantine period. Now, the city corporation’s volunteers are just keeping a tab of residents who are under isolation.

Now we are on Telegram too. Follow us for updates
TAGS
containment zones chennai