Tirupur’s Priya Rajanarayanan has built a repository of over 500 indigenous seeds, making them available to farmers and people with a green thumb

CHENNAI: There’s some faith in the idea that everything begins with dust and so it shall return to it. For Priya Rajanarayanan, it was garbage that turned her life around. In a country that has more dump yards, there certainly has been no dearth of wisdom, it seems. It was this that she channelled into her agri experiments, taking it beyond the comforts of home-grown food to seed conservation.

Over the past 12 years, through careful curation and meticulous maintenance, Priya has managed to build a repository of over 500 seeds of indigenous rice and vegetable varieties. In the interest of taking this beyond the confines of her home, she has been giving away these seeds to thousands of curious consumers. Even the life-halting pandemic and the loss of her day job has not kept the Tirupur woman from ploughing through and delivering the best she can.

“It saddens me that now I’ve been able to send out only 15-20 packets of seeds a week instead of the usual 50; all because of the financial hurdles since I lost my job (that of a senior merchandiser at a Singaporebased garments exports company in Tirupur),” is the sentiment you get from the woman, who has vowed to keep the endeavour a free and available-toall service. For the idea is to keep her work one that’s grown and gotten better for over a decade accessible for generations to come. The indigenous journey
But, as with all else, all this started when she tried to address the basic need for pesticide- free vegetables for her family. “When I came into the city (Tirupur), I didn’t get any naturally-grown vegetables. So, I started a kitchen garden with a few types of greens and some veggies. I didn’t know much about it — I had only studied MBA finance; but, I was born into an agrarian family and I made use of the knowledge I had grown up with.

At around 2009, I noticed that I was only able to get hybrid seed varieties while indigenous ones were nowhere in sight. That’s when I started collecting whatever indigenous seeds I could find — brinjal, tomato, chilli — during my travels,” she recounts. She started raising these on her terrace. Over a period of time and after painstaking labour, she was able to expand her operation to the empty plot nearby.

In those days, when organic farming did not have the appeal it has today and people were still far from looking for ‘native’ food, Priya wanted to do her part in getting these indigenous varieties to as many people as possible. Thus began the ‘send the seeds’ initiative. In the early days, these seed packages went out to friends, family members and fellow revivalists.

From here, her collection too grew. Friends in Kerala and Andhra Pradesh, where the prevalence of indigenous varieties was much more, began sending her some of what they had sourced. Others, hearing of her initiative, would try to add to her collection too. Now, she has over 500 varieties of indigenous seeds in her care; and the seed package service continues to remain free.

“My speciality is that I preserve the purity of the seeds ensuring that there’s no cross pollination. I don’t raise all the varieties at once and there’s always only one plant per variety,” she says, giving us a glimpse into the system she has put in place through a meticulous process of trial and error.

Wonders from waste
It was here that the kuppaimedu offered her big lessons. Passing by them on the way to work, she noticed that they had managed to raise on their waste-filled lands healthy tomato, chilli, bitter gourd and ridge gourd plants — without any human interference, elaborate bag-topot transfer system and, most importantly, pesticides. It was here that she realised that waste could play a big role in aiding the growth of plants; that they needed more moisture and less water.

So, she began bringing home waste — from vegetable markets, sugarcane juice vendors and anyone else willing to give it up. This wonder drug continues to give results till now, she says; not just for her, but for the hundreds of women who has picked up the craft from her. Over the past six years, she has been passing on her learnings to people wanting to raise terrace and kitchen gardens. It started out with educating the neighbourhood women but, soon enough, she got more and more avenues to discuss her ways. This led to her creating the Iyarkkai Vazhi Veettu Thottam, which comprises eight different groups of people learning from her, reaching out to her for seeds and replicating her success on their scale. Even as members of the older batches are ready to turn trainers themselves, newer batches are being taken into the fold one after another. 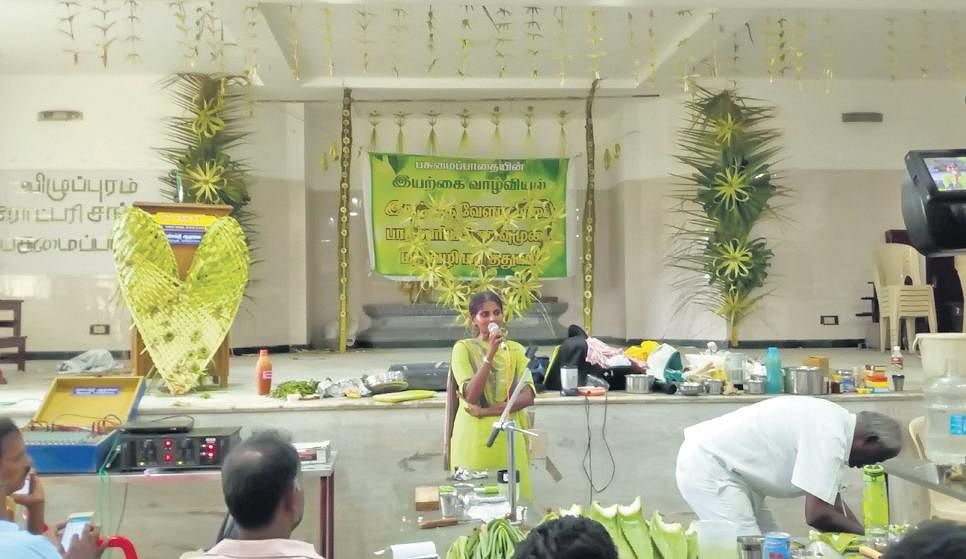 This work too is simply for the cause and does not come with fee, she adds. For Priya, who had relied on her personal observations and natural instincts to mete out great results, validation and reassurance came when she finally attended a nine-day agri workshop in Tiruchy hosted by agriculturist and author Subhash Palekar in February 2019.

“That was the first time I was hearing about techniques from other people. Because I only had time to do what I do; and when I am getting results with what I do, why would I run for something else? But, it was at the workshop that I realised that I was 100 per cent right in doing what I do. It helped strengthen my resolve. I realised that the kuppaimedu has taught me plenty,” she shares. Having lost her job to the pandemic, Priya has been relying on the savings one that was created exclusively for this project over the years to keep her services running; from sending out seed packages to raising the vegetables and giving it away for those in need.

While she is firm on her decision to never make any part of her work commercial, friends, family and ardent supporters have stepped up to offer help, pay for what they get. And this has added to her reserves. Despite the many possible troubles ahead, she assures that she will keep at this work till she runs out of money. Here’s hoping that she doesn’t.

For more details or to get seeds, contact: seedsisland2020@ gmail.com

Now we are on Telegram too. Follow us for updates
TAGS
seeds Priya Rajanarayanan Seed conservation