About 1.5 million passengers travel by metro train every day in the national capital. Delhi Transport Corporation (DTC) buses have a daily ridership of 20-25 lakh per day. With the capital along with the rest of the country under lockdown from March 25 to staunch the coronavirus disease (COVID-19) spread, all city public transports came to a grinding halt. Public transit systems are seeing ridership tank as millions of commuters are working from home following the government order, choosing less social contact. However, like all healthcare facilities and other sectors, the Delhi Metro Rail Corporation (DMRC), the DTC along with private transporters have also taken different measures for smooth functioning of theor services post the 21-day lockdown, which is likely to be extended.

When Prime Minister Narendra Modi announced the lockdown on March 24, the DMRC decided to continue the Metro rail system with a minimum essential deployment of staff during the period.
“Only terminal stations on all lines, depot entry and exit stations and interchange stations have been manned by our staff round-the-clock in shifts since March 28,” DMRC spokesperson Anuj Dayal said.
The corporation has also conducted train movement exercise aimed at ensuring good health and functionality of all the systems, he said.

“Two trains run daily from every terminal station in the morning as well as evening, except on the Airport Line and Grey Lines. On these two lines, a train runs in the morning on every sixth day... It is aimed at ensuring smooth functionality of all the systems such as track, traction, signals and telecommunication,” Dayal added.

As soon as the news of the coronavirus outbreak in the country came to light, the DMRC begin disinfecting and cleaning its trains, stations, passengers seats, handrails and toilets regularly.
The metro also reduced its staff at the operation control centres located at Metro Bhawan and Shastri Park. From the usual 10-12 staff per shift, it was reduced to 2-3 for the same duration.

“Minimum staff from system-related wings such as signalling, electrical, telecom, civil, traction and track are deployed at the stations. The purpose is to visit there and check the system periodically, and ensuring all systems are working fine,” the spokesperson said.

A duty roster for Metro staff has been prepared in a way that a station manager and station controller visits the unmanned station every sixth day. The equipment, which are not required during the lockdown, have been switched off. The metro authorities have also cut off the supply to commercial outlets, especially shops and kiosks, due to safety reasons.

“Power supply at stations for CISF personnel, toilets and ensuing galleries, water pumps and signals systems has been ensured throughout this period,” Dayal said. Pertinently, all communication systems like radio sets, intercom at the metro stations are working, along with CCTV cameras for surveillance of the stations and trains.“The CISF personnel are manning all the stations and monitoring periodically in rounds. Any abnormal activity on station premises is reported to the control room,” said the spokesperson.

On March 17, the Delhi government began a drive to disinfect its buses as cluster ones and sanitised 7,877 vehicles, including 5,951 autos and other public vehicles.Officials of the DTC said regular check-ups were being conducted by the corporation at all depots. Also, maintenance of the buses was being done by their manufacturers such as Tata Motors and Ashok Leyland.But ever since the lockdown was clamped, the police are not letting any staff get inside the depots.

“Most of us are in our homes because of the lockdown. Usually, our buses are maintained by their manufacturers. We have people doing regular check-ups and maintenance. The staff are coming on duty with written permissions from the corporation,” a DTC official, who did not wish to be named, said.
Many of the buses are being used by the police and government authorities and for essential services, the official added.

“25 per cent of buses are kept for pass holders, including essential services and the departments which have hired them. We have 25 per cent staff at depots,” special commissioner of the DTC KK Dahiya told this newspaper.A depot manager said the police are not accepting the permission letter from the transport department, and asking the employees for a letter of permission from the SDM.He said maintenance of bus tyres and engines is important for their smooth functioning in the future as batteries may drain within two days if they remain dysfunctional.

“Due to this issue, when we resume normal operations, batteries are charged by towing wire from one battery to another, which is a time-consuming process. Also, we need to keep an eye on the CNG kit,” the manager added.Experts also said that all automobiles have a limited level of capability to deal with the constant restriction of movement.

“The private cars can be restarted in 10 days if they are not old... A slight movement is necessary so that no wheels are jammed. High temperature deflates tyres. But high-end cars are absolutely safe,” said an expert.He added that it’s old buses and public service vehicles, including autorickshaws, gramin sewa and phat-phat sewa, could face problems as they may not run throughout the lockdown. He also said owners of private vehicles should consider elevated parking system so that the tyres don’t get affected when remain stationed for too long. 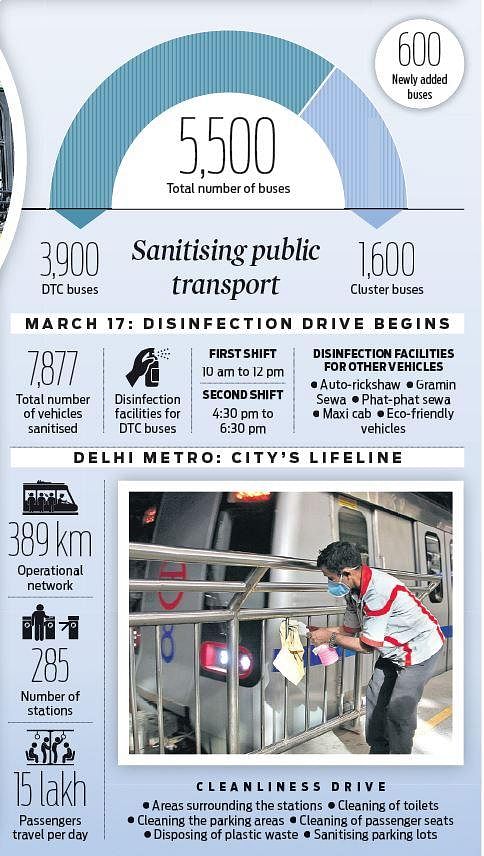