Curator Erin Gleeson, on her latest exhibition ‘Out of Line’ that aims to showcase contemporary Cambodian art

In the history of art, a line’s function has often been discussed. The line is poignant and has the power to overturn a narrative. Out of Line, an exhibition ongoing in the capital city, explores its phenomenon. It has brought together 10 leading artists from Cambodia. The show, curated by Erin Gleeson, researcher and writer, aims to display someone or something out of place, and assumes the need for correction. The exhibition also points to the power of
a line.

What are the major highlights of this exhibition?
There are different generations and artists here who have shared teachers, schools, or influenced one another.
For example, Svay Ken’s confidence to work in styles and subjects outside the academy inspired much of the younger generation to practice their own aesthetic languages as well. Born in 1933, he began painting at the age of 60. It is also a pleasure to see Than Sok’s Srei Bun II exhibited for the first time as well, since in Cambodia it may be too sensitive to exhibit a patchwork of clerical garments that symbolically collapses religious-political hierarchies.

Could you talk about your curatorial process in this show?
Reena Lath invited the bringing together of Cambodian artists after hearing my talk at ECH in Kolkata in 2018, which reflected on practices in art, exhibition making and programming at SA SA BASSAC, a contemporary art center I co-founded in Phnom Penh in 2011 and which I directed and curated until 2018. Reena also felt the importance of learning with those outside of our immediate or habitual reach. I like to consider my host when making an exhibition and thus thought to honour Akar Prakar’s support for modernist Indian artists with a meditation on modernism’s tool: the line itself, and how modernism and the abstraction of line in Cambodia has a different timeline and visual language than that of India’s.

How did you achieve this?
I used Akar Prakar’s three rooms to make three ways to consider abstraction in the Cambodian context: through the figure; through a classical design code known as kbach in the Khmer language; and through materiality. 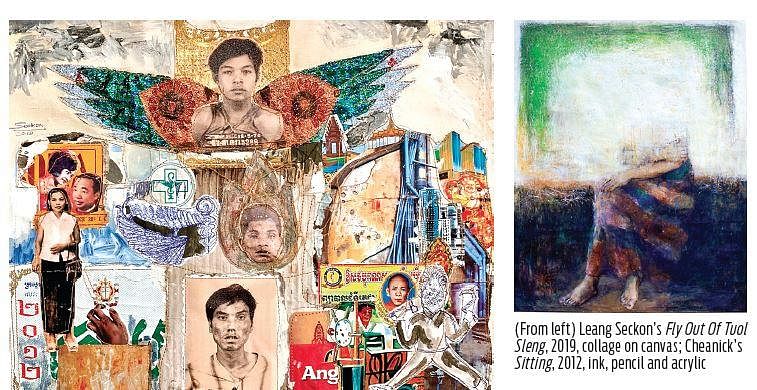 Did you come across any similarities between Indian and Cambodian artists?
This is a good question for audiences to the exhibition. While I have encountered art and artists from India in my work elsewhere, I personally have not had enough time in artists’ studios on my two brief visits to India. While the purpose of the exhibition is not necessarily to update our knowledge of shared and divergent India-Cambodia art histories, it is inevitable that we question historical and current states and relations.

While Out of Line can easily be seen as a ‘national’ show, seeing that all 10 artists were born in Cambodia, it is important to remember that being born between 1933-90 means being born into many different Cambodias. The languages spoken within this group of 10 artists include Khmer, Thai, Vietnamese, Chinese, Russian, French, and English. In this way, Cambodian and Indian artists share, like artists living within any nation, similarities of being multi-vocal and irreducible to nationality.

Tell us about the two forthcoming books on the arts and your contributions in those.
One book is From A History of Exhibitions Towards a Future of Exhibition-Making: China and Southeast Asia, edited by Biljana Ciric. My contribution, Possibilities of the Unofficial, is a conversation with art historian and curator.  From Daravuth, we learn both humorous and critical insights into the state of the visual arts in Cambodia just before the turn to this century.
The other book, edited by Brian McGrath and Pen Sereypagna, is Genealogy of Bassac, which presents “a careful architectural study of an area in downtown Phnom Penh constructed on 24 hectares of landfill along the swampy floodplain of the Bassac River from the perspectives of artists and residents who have lived through five decades of genocide, exile, return, and eviction.”
My contribution of autobiographical fiction uses nine images as portals to personal encounters and relational channels to and from the area’s residential bloc, known as Building.

Could you introduce us to the contemporary art scenario of Cambodia? What kinds of challenges are faced by Cambodian artists?
The contemporary arts scene in Cambodia has a few geographical places – the most well known being the capital, Phnom Penh, where many small art spaces of differing natures nurture both emerging and established artists. It is also home to the Royal University of Fine Arts and National Museum. Battambang is another lively place, and is known for its painters as well as performance, and its many small galleries and festivals speak to this. Siem Reap is recently rising as an important destination for the exhibition of contemporary art, and let’s see if there may be some artists moving from Phnom Penh to the quieter temple town.

There are always challenges, some that mirror challenges everywhere, while some are more specific to Cambodia. In light of there being zero national budget for contemporary arts education, grants, collections, exhibition, and publishing – artists often make things happen themselves. Private universities and other initiatives also take up this supportive role. Publishing is critically needed in Cambodia, especially after the government eviscerated its free press in 2018, closing of over a dozen outlets.
Till: January 10
At: Akar Prakar

Now we are on Telegram too. Follow us for updates
TAGS
Delhi Art exhibition Erin Gleeson